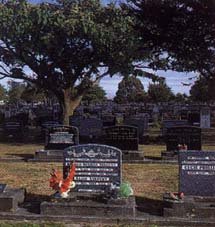 In 1909 the Waimairi County Council granted the request of the vestry of St Barnabas Anglican Church in Fendalton Road for land to be set aside for a cemetery. The Papanui Public Cemetery on Grahams Road was opened in 1911, Fulbert Astley Archer (1860-1911), of 46 Memorial Avenue, being the first to be buried there.

The cemetery comprises three main areas: the oldest part with larger monuments with concrete grave surrounds typical of that period; the second with more standard upright headstones on concrete beams; and the third, uniform reclining memorials on beams.

Waimairi is now only available for burials in pre-purchased plots, second interments and ashes. A special ashes area has been added on the Grahams Road frontage.