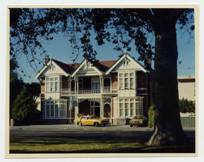 This is a brief history of the Windsor Hotel, a well-known landmark on Armagh Street which was demolished following the 22 February 2011 earthquake. The building, which faced Cranmer Square, had a long history as a private hotel, university hostel and bed and breakfast accommodation, and was also the site of a well-known preparatory school, Warwick House.

The first building on the site was Warwick House, run by a Mrs Sheath. From 1880, it was advertised in local newspapers as a private hotel offering superior accommodation with the comforts of home.1 About 1886 Charles Cook2 moved his school to this site, re-naming it Warwick House, although it was often referred to as Cook’s School. A daughter was born there to Cook and his wife in 1887.3 They also advertised that year in The Star for a housemaid.4

Charles Cook (1841-1919) emigrated to Canterbury from Scotland in the early 1860s on the ship Huntress. He became one of the first assistant masters at the Christchurch High School (Christchurch Academy) founded by local Presbyterians. This later became the West Christchurch District High School and, more recently, Hagley Community College.

In the early 1870s Cook opened a private school for boys at Melville House on the corner of Armagh and Durham Streets. About 1886 he moved the school to Armagh Street to the site of the Warwick House private hotel, naming the school Warwick House.

Warwick House became an important preparatory school for boys, taking seventy boys, twenty of them boarders. It was particularly popular with North Canterbury Scottish families. There was a stable for boys who rode in from the country. Aristocratic pupils included James Ogilvie-Grant, later 11th Earl of Seafield (1876-1915) and his brother the Hon. Trevor Ogilvie-Grant, later 4th Baron Strathspey (1879–1948).5

The Hon. Louis Palk, a descendant of Sir Robert Palk, Governor of Madras, after whom the strait separating Sri Lanka and India was named, was also a pupil in the 1880s. The artist, Raymond McIntyre (1879-1933), was educated there until he was 15 years old. Bertie Ernest Hawkes Whitcombe (1875-1963) of Whitcombe & Tombs fame was removed from the school because his father thought he wasn’t learning enough - or possibly because the family was not yet wealthy enough to pay the fees.6

Charles Cook was declared bankrupt in 1901.7 The property was purchased by Duncan Rutherford, a sheep farmer of Leslie Hills, Amuri.8 His sons had attended the school and he was also known for his kind deeds. In 1907 he had a brick building facing Cranmer Square built so the property was divided into two areas: the new two-storey brick building with approximately 40 rooms on the larger section of land (1000 sq. metres) and a two-storey wooden building with 12 rooms on the smaller section (700 sq. metres). This had been the original boarding house for the school.

There was an addition to the brick building in 1924. The new building was let to the Cooks for Charles Cook’s wife Kate9 to run as a private hotel from 1909, Rutherford keeping a suite there for his family’s use. After Kate died in 1919 her daughter Gladys Eleanor Cook carried on until 1945. She was the last survivor of the Cook family and was known as Cookie. She built a block of four flats on the corner facing Cranmer Square. These featured in an issue of NZ Home & Building published in June-July 1950. The flats were demolished in 2010. Gladys Cook died in 1956.

As a private hotel, Warwick House became even better known than the school, and over the years, its reputation spread. The New Zealand novelist, Rosemary Rees (1876-1963), mentioned it in one of her books and helped bring it to the notice of overseas visitors. It was most popular among country residents who came into Christchurch for Cup Week. The property was sold by the Duncan Rutherford Estate in 1945, the Cook family having given up the lease because of staffing difficulties.10

Charles Cook is commemorated by the Charles Cook, Warwick House, Memorial Scholarship at Canterbury University which was established after his death by old boys of the Melville House and Warwick House Schools.

In 1960 the Government bought Warwick House as part of its Colombo Plan programme. It was to provide accommodation for 40-45 students at Canterbury University. Both New Zealand and Asian students were housed there.11

By 1974 the University was no longer using the building as a hostel. The mayor of Christchurch, Neville Pickering, had proposed to the government that the building be used as a short-stay hostel for people under the Welfare Department. However vandalism had made it unsuitable and it was estimated that it would cost more than $80,000 to return the building to a reasonable state.12

Carol Healey and Donald Evans bought the property in 197513 and ran it as Windsor Hotel. Their previous hotel at 47 Manchester Street was called the New Windsor Hotel. They offered traditional bed and breakfast hotel accommodation with forty bedrooms and twenty-five bathrooms. It was marketed as being a former school although this building had been built after Warwick House closed.

The hotel became the base hotel for the New Zealand Antarctic Expedition and the United States Antarctic programme. In the mid-1980s Evans bought the flats on the corner and converted them into extra accommodation for the hotel.

The building was red-stickered following the earthquake of 4 September 2010 and subsequent after-shocks. The business was closed and the building demolished after 22 February 2011. 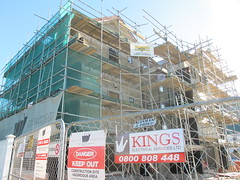