Artwork is a special part of the Aranui Library building.

The designs of Aranui wood carver and sculptor Ralph Stowers adorn the outside walls and glass of the library. Ralph says the designs on the building reflect both his Māori and Pacific Island heritage.
"I'd done two sculptures in a local park and from them I was approached to see if I would be interested in the library work. It all started from there really. The final result ended up being a collaboration between me and the architects. I would give them ideas, they would mull them over and then come back to me."

Ralph moved to Aranui as a four year-old and credits his mother for inspiring the artist in him.

"It all comes down to my Mum. At a young age she showed me lots of Pacific Island artefacts and I was always really fascinated. I always loved the arts, but I didn’t follow it through because I focused on a sporting career. So I’ve come back to it later in life."

He says the designs will fit the community well. "There are a lot of Pacific Islanders out here that quietly do their thing, and it is really nice that we can highlight their participation in the community. I think all the locals will be proud of it." He will be among the first to use the new library as a base for his computing, and hopes the community will use and appreciate the new facility.

See images of the artist and his designs

The new library has already received a significant koha from Kohinga Toi, a group of six Māori artists in Christchurch. Each artist made a panel exploring Matariki, the kaupapa of the work. The artists are:

The artists used photography, weaving, carving and painting to reflect themes including whanau, mahinga kai, raranga, and attaining knowledge. Dallas Matoe carved the wooden strips that bind the work. The group received funding from Creative Communities for the materials, and so decided to gift the work to Aranui Community Library. Closeups of the art can be viewed on the Christchurch City Libraries' Flickr.

What the artists say 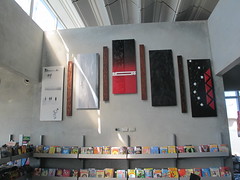 Dallas Matoe says of his work:

Rimu panels with traditional carved patterning. The moko or designs pertain to learning and knowledge, whakapapa, seasonal changes and the harvesting and storage of customary foods. The surface designs on the panels are pūoro, koiri, tara tara a kai and rape rape. These panels are part of a collaborative artwork which is based on the theme of Matariki and its associated culture.

My piece represents the ‘mahinga kai, whakawhanaungatanga’ aspect of Matariki. Friends and whanau gathering kai moana. The older whanau teaching the younger whanau to pick pipi. The joy on the faces of the gatherers. Being with Tangaroa and Papatuanuku for the day, hunting. Also the beauty of the landscape. The movement of the gatherers … initially they are in the distance, the next photo depicts them close up in the frame. This describes a sense of the journey they make to gather the kai. Walking, laughing, talking, sharing stories, the shirt blown open in the breeze while tawhirimātea pays a visit … The gatherers are at one with abundance, prosperity, joy, aka tino rangatiratanga.

The star panel has seven red woven niho taniwha- triangles (this represents the seven stars of Matariki), they are red to represent the Mana wahine of the seven sisters. The woven stars represent the galaxy with the seven white stars again speaking of Matariki, these stars also reflect our Tipuna and nga taonga tuku iho the treasures that have come from the heavens and which we try to protect, preserve and promote. 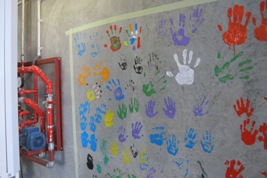 Portsmouth St Kindergarten visited the new Aranui Library on Friday 24 August 2012.They were the first visitors to the nearly completed library.
The children have been regular visitors during the construction and the builders suggested they might like to decorate the walls inside the pumphouse.
Librarians welcomed the children and helped them paint. Jan-Hai told stories and all the children were given bubble mix. They had a great time back at kindy blowing bubbles in the sunshine. 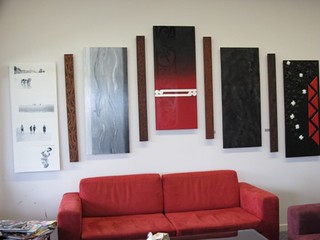