Music produces a kind of pleasure which human nature cannot do without. 夫乐者，乐也。人情之所不能免也。

Music has great significance in Chinese civilization as it is regarded as an indispensable part of human nature. From its origins to contemporary forms, Chinese music with its variations is embedded in religious events, folk festivals, the courts of emperors in dynasties and secular lives. It changes through history and transcends borders.

In New Zealand Music Month 2020, let’s explore Chinese music and enjoy music brought by Chinese New Zealanders from their home country and with their settlement experiences.

Chinese music through history and across borders

Chinese music may be traced back to 2697 BCE when a scholar used a bamboo pipe to create sounds imitating those made by Fenghuang, a legendary Chinese phoenix, to show the harmony of the rein of the new emperor of Huangdi with the universe.

It would be hard to verify the legendary birth of Chinese music however, historical records show the prevalence of music in ancient rituals and events. Archaeologists’ discoveries have revealed four musical instruments made of sturdy materials: globular clay vessel flutes (xun) 埙, tuned stone chimes (qing) 磬, bronze bells (zhong) 钟, and the drum (gu) 鼓 in the Shang Dynasty (1600–1046 BCE), the first historically verified dynasty. In the next dynasty, the Zhou Dynasty (1046–256 BCE), the components of music are found in a well-known written record, the Five Classics (Wujing)五经, which is associated with the work of Confucius in various ways.

In the succeeding dynasties, Chinese music flourished in forms and styles. In the Han Dynasty (3rd century BCE - 3rd Century CE), for example, banquet music (yanyue) and ritual music (yayue) were two major forms in the court and the Confucian temples. Many of the songs drawn from Book of Songs (Shijing) 诗经  were widely spread and became part of everyday life. The influx of foreign music ideas and materials are exemplified in the angle harp (konghu) and the pear-shaped plucked lute (pipa) 琵琶.

In the Song and Yuan Dynasties (10th to14th century), the earlier trends were consolidated. A two-stringed fiddle, or bowed lute (huqin) introduced from the northern Mongols was an example of foreign music influence.

Until the early 20th Century, traditional Chinese instruments have been grouped into four categories: woodwind like Dizi, percussion like cymbals, bowed strings like Erhu (also called huqin), and plucked and struck strings like Pipa. They are used in different social occasions, temples, and courtly rituals as an ensemble or solo music.

Another Chinese music style which is worthy of attention is Chinese vocal music which can be traced back to Book of Songs (Shijing). It includes opera and folk songs. In the Song Dynasty (960-1276), original opera such as Zaju and Nanxi were performed in tearooms and showplaces using a popular new type of literature resembling lyrics called ci词. During the Yuan Dynasty (1271-1368), another type of music-based literature called qu 曲 became popular. During the Ming (1368 - 1644) and Qing Dynasties (1644 - 1911), the art of traditional opera experienced a rapid development in forms and geographic regions. Peking opera is a well-known Chinese music drama within the music genre.

Unlike the theatre-based drama, Chinese folk songs are orally handed down. They are generated in different regions and are transmitted from generation to generation. They have even spread to other cultures and countries and gained popularity. Jasmine Flower 茉莉花 and Love Song of Chang ding 康定情歌 are such examples.

Shang Ya: A Chinese immigrant music group in Christchurch

The Christchurch Chinese Choir was formed by a group of adult music enthusiasts in 2006, with the objective of promoting Chinese choral music to the local community. By inviting a group of children studying piano and vocal music to join, the leader of the Choir officially launched the Shang Ya Music Studio in 2013. At present, the members range in age from 4 to 80. The goals of the Music Studio are to participate in community cultural activities, promote Chinese culture, raise an awareness of Chinese music and encourage appreciating world music, and enrich members’ musical experience.

Voice of the Shang Ya Music Studio

The following is a conversation between the piano accompanist of the Studio and a librarian.

What activities/events does your group usually participate in each year?

Our studio participates in a variety of events each year such as music month activities organised by Christchurch City Libraries, Christchurch Lantern Festival, Cultural Concerts, and Lunar New Year’s celebration events. We also perform regularly for national conferences and Chinese festivals and at rest homes to bring spiritual enjoyment and satisfaction to others through our music. It is our pleasure to create a positive impact through music.

Why do you love doing this?

It has always been one of our goals to give back to the community through our performance. It is a great pleasure for us to help bring joy to the audience and those who are passionate about music.

What are comments from the audience on your performances?

The audience really enjoy and have often asked us to return to give more performances. It is really encouraging for us to receive such a kind of positive response from the community. 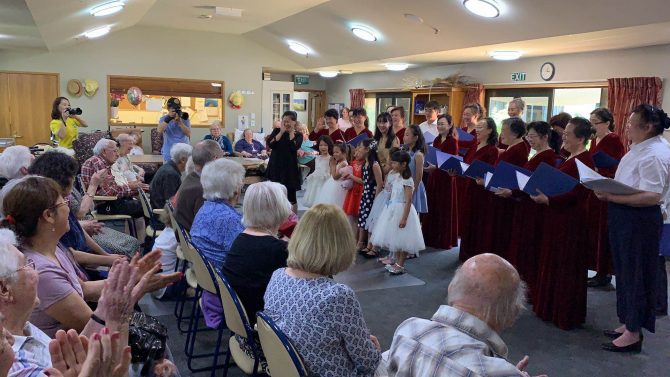 As a major player of this group, how signiﬁcant for you to contribute to the group? What are your expectations on yourself and the future of Shang Ya?

I have been taking part in community events since I was a child. These events give me an opportunity to practice and improve my performance. Then I got a bigger stage. The experience of participating in concerts and the International Akaroa Music Festival played a vital role in my development as a musician.

The music is my passion and I enjoy being part of Shang Ya Music Studio. I aspire to become a concert pianist and share the music I love with the audience around the world, and inspire the next generation. In addition, I believe that Shang Ya will continue bringing beautiful music to our community and connect with the audience from different cultures through music.

If you find historical development and local practices in Chinese music fascinating, you can have a bit more cultural adventure without leaving home. The following resources will bring you a rich experience in Chinese music.