Coming up early next month Tūranga will be host to a very different kind of operatic performance. Over three nights (3, 5 and 6 December) an area on Hapori | Community, Level 1 will become a stage and seating for New Zealand Opera's Eight Songs for a Mad King. Library plaza, the area outside the library, will also be home to seating with the audience split into two groups - one will view the performance from inside first, and then switch with the other group who will initially see the performance from outside the building, looking through Tūranga's tall windows.

This use of two different perspectives is a way of playing with ideas of interiority (what a person experiences of themselves) vs exteriority (what the world sees). And means that half of the performance will be up close and personal - not your typical operatic performance! 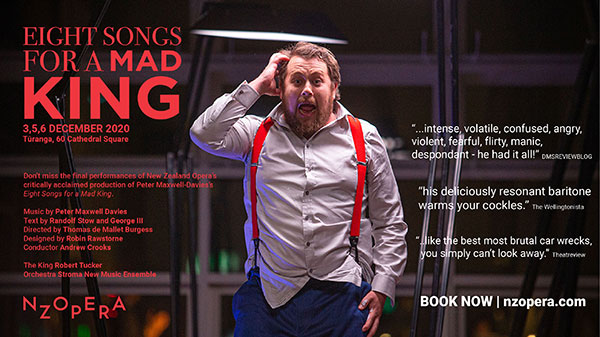 This new production by New Zealand Opera, directed by Thomas de Mallet Burgess and designed by Robin Rawstorne sees a King in distress transformed into a modern corporate everyman as a disarming device to explore our complicated relationship with mental health and power.

Maxwell Davies’ extraordinary score derives from the songs King George III played on his mechanical organ and attempted to train his bullfinches to sing. The music requires a baritone of extraordinary technique to sing over five octaves, with New Zealander Robert Tucker fit for the challenge. Partnering with the ground-breaking contemporary music by Stroma New Music Ensemble, conducted by Hamish McKeich, this modern take on opera promises to be a bold and immersive experience.

Duration: The performance is 1 hour with a 15 minute interval.

During interval you will be escorted to new seating for the second half of show.

Surtitles: There are no surtitles for this production, however you may download a copy of the song lyrics.

Win a double pass to Eight Songs for a Mad King

We have one double pass to give away to the Sunday, 6 December performance. Answer our competition question "What is the Māori name for the first floor (Level 1) of Tūranga", enter your details and go in the draw. Entries close at 11.45pm on Sunday 29 November.