The final event on the WORD Christchurch Festival calendar was last night's exciting end to the crime writing year - The Ngaio Marsh Awards for New Zealand Crime Writing. this years' awards were held in conjunction with Crime after Crime - a touring panel of four shining stars in the mystery genre: Val McDermid, Michael Robotham, J.P. Pomare; and Vanda Symon.

It was so insightful to hear each author share their different approaches to fleshing out their characters: how to get into the mind of a criminal, or those who bring them to justice; ultimately a reveal of the mind of a mystery writer.

I often wonder about the influence of all this murder and violence on an author's mind, especially after reading Paul Cleave's The Quiet People!

Every one of these authors create characters who stay with you; made more real with their flawed humanity.

Val McDermid is known for police procedurals set in her native Scotland. Her crime-fighting duo, DI Carol Jordan and Clinical Psychologist Tony Hill, have become TV stars and her tough-cookie Detective Karen Pirie series is about to be released on ITV. Val's newest character, Allie Burns, has already endeared herself to fans. Allie is an investigative reporter, a job from McDermid's deep dark past.

Australian Michael Robotham, who also once worked as an investigative reporter, is known for his Joseph O'Loughlin series - which is just about to be released as The Suspect for Television. He's also the mind behind The Secrets She Keeps, which has won an award for its TV adaptation.

Robotham's new psychological thriller, Lying Beside You, is the third book in the Cyrus Haven series - a gripping glimpse into the life of a forensic psychologist. Profiling this kind of character gives more depth to a story - Cyrus can read faces, notice minute details, while his unlikely partner Evie can tell in an instant if someone is lying.

J.P. Pomare's books have been widely acclaimed in New Zealand and worldwide from the get-go. His first book, Call Me Evie, won the Ngaio Marsh Award for Best First Novel in 2019, and he has been consistently been nominated for Best Crime Novel for the last three years.

Pomare is a master of the unreliable narrator, creating characters who are made more real for their human flaws and mistakes. His second book, In the Clearing, the mind-twisting tale of a woman who feels she's being stalked, will be on Disney soon, while his fifth book in perhaps as many years is The Wrong Woman. I'm still waiting to get my hands on that.

Vanda Symon is hailed as 'New Zealand's Queen of Crime' by none other than Val McDermid. In 2023 she's releasing the fifth book in her Sam Shephard series, about 'self-deprecating and very human' (the Guardian) Sam, a soul-charge policewoman in a small Dunedin town.

Linwood Barclay says of Robotham: 'I don't just fear for his characters. My heart aches for them.'

The Wrong Woman, says Josh Pomare, is essentially about the character, Reid's feeling of 'not quite right'. Reid is suspicious of the circumstances of a car crash, and the insurance claim that follows.

1989 finds Allie Burns a decade on from the first book, caught up in another year of enormous turmoil: the Lockerbie bombing, the Hillsborough Football disaster and the fall of the Berlin Wall. Allie follows a lead behind the Iron Curtain and into a dark place that puts her life in danger.

Of this series, Val says, as the future had become so uncertain, she decided to go back a few decades from the pandemic, and work forward towards it (a hint that we can expect a few more AB stories to fill the gap).

In Michael Robotham's Lying Beside You, the narrative is shared between Cyrus, who was orphaned at thirteen when his brother, Elias, killed his family in a psychotic episode, and Evie, a troubled, good/bad girl: damaged, mercurial and self-destructive. Evie was orphaned in a refugee boat sinking. She's the most interesting character he's written: a pathological liar who can see through lies - which is more of a curse than a gift, as people won't believe a girl like her.

Robotham says that to forgive, in the context of these characters, is a huge ask. But forgiveness can lift the burden.

What is the appeal of the mystery genre?

Robotham: In real life, people get away with terrible things. In crime fiction, there is justice. Readers love (the thrill of ) being scared.

Val wickedly floats the idea of the sublimation of crime fiction: "We've all wanted to kill someone..." looks around the room... Crime fiction can save lives, she says, telling the story of a woman who stopped reading mysteries as she didn't need to fantasize about killing her (now deceased) husband.

What's it like in the mind of a crime writer?

Pomare tests his structural reality, following an urge to find human limits, to inhabit the detective. For him, writing is catharsis.

Robotham is careful not to create a 'how to' guide, adding that most psychopaths don't get their ideas from mystery novels.

McDermid: murderers' motives are usually so personal that you don't find them in books. "It doesn't keep me awake at night," she says.

All three insert themselves into the minds of their criminals, to find out their 'why.'

Pomare illustrates a trip to the beach with his wife, his mind going to 'dark places' as he contemplates the calm spot in the water where his wife is thinking of swimming. What if...? Should he save the wife, or stay with the baby? In this scenario, the husband and wife both drown...

Val says, bad or good, I have to find out what drives a character to commit a terrible act - which they believe is the only way out of a situation.

The panel agrees that there are no 'monsters' without connecting points of humanity.

For Robotham, looking at the world through the eyes of a character helps him formulate what he wants from a scene.

How do you protect yourself?

Pomare says we write the bad person out of ourselves. By completely inhabiting his characters, he is able to create protagonists that readers can recognise, invest in, and gain understanding of why they have committed terrible acts. A mystery novel is a contract with the reader, says Pomare. Its a crime novel, you expect something bad to happen.

This is my universe. I am God. I can close the door, go make a cup of tea and know that no one will die until morning.

Val has payed with explosions (!) but modifies the description, so it isn't a recipe.

Robotham says, my eyes can glaze over at dinner...and my wife will say, "You're with her, aren't you?"  She's his first reader, and will thunder down the stairs, punch him on the chest and say, "Bring them back, you bastard."

Which comes first, character or setting?

For Pomare, the setting is the first thing; New Zealand, Australia and now the U.S. But these still have a universal appeal; the characters worse off than actual people in these settings. There is now a second fish and chip shop in Maketu...

Val includes time as a setting in the Allie Burns series and refers to examples of Raymond Chandler and Sarah Paretsky where setting is a key element that stays in the readers' mind. She agrees that a setting should still be universal for the audience to buy into the idea that 'this could only happen here.'

Robotham sets the Cyrus Haven series in Nottingham. Although Australian, he has lived in England. Its a place many people know, although in the U.S. people think its like Hogwarts, he jokes.

And on that note, it's time to turn to a New Zealand setting - to present the Ngaio Marsh Awards, with a message of encouragement from the awards' founder, Craig Sisterson.

This year there was no Non-Fiction category, as this is a biannual event.

This was the highlight of a funny and insightful evening. Jacqueline Bublitz won both awards with her hugely successful first book, Before You Knew My Name. I got to meet her, and R.W.R. McDonald, author of Nancy Business. (And I sat next to Val McDermid's partner, Jo). Can't wait for next year.

Photos from Crime after Crime 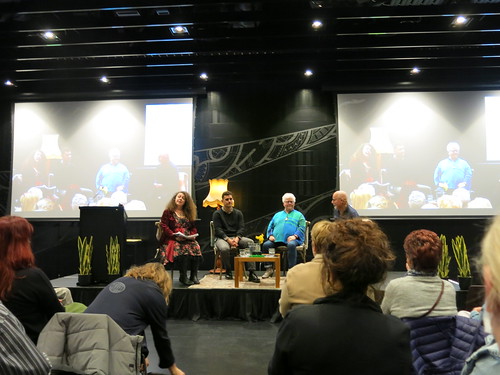