And then it was four (years old)! I have to confess that I was a tad sceptical when Cinema Italiano Festival was launched. The Italian community in Aotearoa is not particularly sizeable - in fact statistically insignificant would be a not inaccurate description. Could Paolo Rotondo and Renee Mark achieve long term success with their celebration of Italian film? 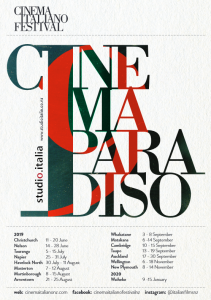 The answer is a resounding yes. Cinema Italiano Festival has been going from strength to strength since its inception in 2016, thank to its organisers' careful curation and obvious passion for film and Italian culture.

Christchurch is lucky to be the first of 16 towns and cities to experience this year's Cinema Italiano Festival, which runs from Tuesday 11 to Thursday 20 June at the Academy Gold Cinema at The Colombo.

So what can we expect? The underlying theme this year is family and the way in which it is at the heart of Italian culture. But there are many riffs on this fundamental concept and the films selected span the range from comedy to drama to mystery to documentary, and from modern productions to classics like Fellini's 8 1/2 and Roma.

Creating your personal viewing selection from twenty great titles is undeniably hard, but let me reassure you: you can't go wrong! Whatever you choose is guaranteed to be a cinematic delight as well as giving you a unique insight into Italian culture.

And, if you do need to rely on the subtitles, may I mention that Italian is a beautiful language to listen to? (Many would say it's also one of the sexiest - I may be biased, as it is my mother tongue, but Google backs me up - and who wouldn't believe Google?!)

If you still would like some guidance, here's my rather idiosyncratic selection in no particular order.

A casa tutti bene / There's no place like home
The opening night feature is directed by Gabriele Muccino, one of the most well-known current Italian directors. The film stars a smorgasbord of Italian film veterans, gathered together for a Golden Wedding anniversary, and is set on the beautiful island of Ischia, one of the jewels of the Gulf of Naples. What more is there to say?

Dogman
A mild-mannered dog-groomer (Marcello Fonte, who was awarded Best Actor at the 2018 Cannes Film Festival for his performance) becomes inveigled with a local criminal in a poorer suburb of Naples. This crime drama based on a true story has won a swag of awards, including a Palm Dog for its Canine Cast. (Please tell me I'm not the only one who didn't know such an award existed!)

La ragazza nella nebbia / The girl in the fog
As a librarian who was born at a foggy time of the year in a notoriously foggy town, I couldn't resist this thriller, directed by Donato Carrisi, one of Italy's most popular crime writers. The foggy village in the film is set in the Alps of Trentino-Alto Adige, a region closer to Austria and Switzerland than to the stereotypical sun-drenched areas of Italy which so enchant tourists. I also couldn't help but take it as a sign that the detective in the story shares his name with Kiwi bread icon Vogel.

Lazzaro felice / Happy as Lazzaro
If the words "magical realism" make you come out in hives, then this is not the film for you. However, if you can suspend your disbelief, Happy as Lazzaro promises a beautiful and thought-provoking viewing experience. Reviews have been uniformly positive and its director Alice Rohrwacher won the Best Screenplay Award at the 2018 Cannes Film Festival.

Puoi baciare lo sposo / My big gay Italian wedding and Nove lune e mezza / Nine 1/2 moons
I was drawn to these two titles for their contrasting yet similar themes. Both are comedies and both deal with topics - gay marriage and child surrogacy -  which are challenging to the more traditionally conservative Italian concept of family. A perfect opportunity for laughter while assessing just how different (or not) Italy and New Zealand are when it comes to concepts of family.

I villani
A must for food lovers, this documentary by food activist and DJ Daniele De Michele, a.k.a. Don Pasta, depicts four peasants, fishermen, and farmers, who still respect traditional Italian food traditions. Are they fighting a losing battle against bureaucracy and modernity, or is there hope that this unique heritage and all it stands for can survive?