Go YA brought together three writers for young adults – Juno Dawson, Whiti Hereaka, and Yaba Badoe – to read from their novels. 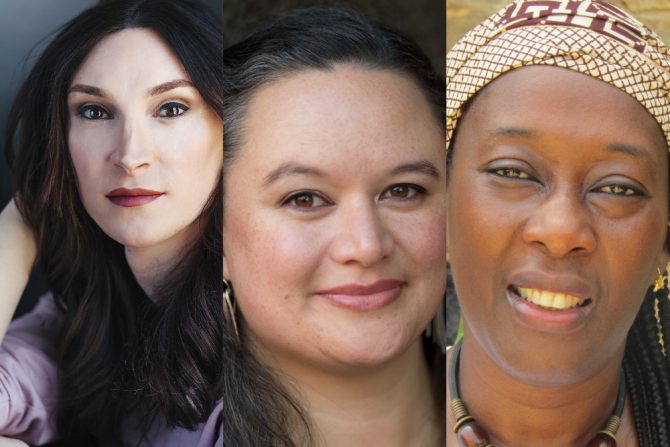 First to read was Juno Dawson whose latest novel Clean is a confronting depiction of heroin addiction and withdrawal as told by a teenage socialite, Lexi Volkov. Paula Morris described Clean as being about “the lure of self-destruction” and the teenage pressure “of being something they’re not”. She compared Lexi’s narrative to that of real-world figures in the media who struggled with addiction such as Peaches Geldof.

Paula Morris had previously warned the audience that there would be some swearing and Juno Dawson jokingly referred to Clean as “degenerate filth” before beginning her reading. Lexi’s choice of language as she lashes out at the world challenged the 12+ rating given to this ‘family’ event. Lexi speaks directly to the reader, sharing her every thought and feeling. As a result, it was a performative reading. Juno Dawson rolled her eyes, pouted, and screeched, as she read from the opening chapter in which Lexi – waking from a night of partying and heroin in a car – realises that her brother is admitting her to a rehabilitation clinic away from the familiar lights of London.

Our second reader was Yaba Badoe whose novel, A Jigsaw of Fire and Stars, was described as an “exploration of our rich inheritance of myth and legend, pain and love”. A Jigsaw of Fire and Stars is a magical realist novel about a young girl, Sante, whose family attempted to migrate from Africa to Europe by sea but were killed when the ship was purposefully sunk. Sante, washed ashore in a chest laden with treasure, is rescued by Mama Rose and becomes part of her travelling circus. She yearns to know more about her family’s story. Yaba Badoe read from a later passage in the book in which Mama Rose begins to tell Sante about her origins. Like Clean, A Jigsaw of Fire and Stars, has serious themes, this time human trafficking and migration. As Sante recalls seeing brown bodies washed up on a beach and herself being thrown aboard as an infant, it’s hard not to recall the images of the body of Alan Kurdi, a young victim of the refugee crisis and human trafficking. Yaba Badoe spoke more on magical realism and migration during ‘Yaba Badoe: Fire, Stars and Witches’.

A Jigsaw of Fire and Stars

“History is moulded by the those who tell it” Paula Morris told the audience before Whiti Hereaka took the stage. She read from her newest novel Legacy which is about the experiences of the Māori Contingent during World War One and where their stories sit in that ANZAC narrative that strongly permeates New Zealand culture. The protagonist of Legacy, Riki, is drawn to the idea of enlisting in the army. Each generation of his family has enlisted and his mother shares with him stories of his great-great-grandfather who fought in Egypt in World War One as part of the Māori Contingent. Whiti Hereaka’s reading highlighted the theme of legacy as Riki ruminates on his likeness to this legendary family figure and the repetition of the war through its commemoration. The reading ended with a cliff-hanger as Riki read a text revealing why his girlfriend has been avoiding him and stepped straight into the path of a bus on Lambton Quay.

This drew a big gasp from the audience and started off question time with a request to know if Riki survives. Whiti Hereaka cheekily held the cover up and plugged the UBS stall in the foyer for those who needed to know what happened next.

There wasn’t much time for questions. The first question asked the authors how they created their characters. Juno Dawson remarked that she “sometimes has to spend more time devising the character” but sometimes they come to her fully fledged, like Lexi did. Yaba Badoe similarly remarked about Sante: “Once she came to me, it was really fun writing her. I loved her company.” Whiti Hereaka admitted that she’s a “bit of a creeper” and sits at the back of the bus with her headphones in, but not listening to anything, to eavesdrop on the conversations. It’s great way to capture the voice of young people and pick up new slang. Juno Dawson commented that voice is the most powerful part of a character development and once you have that voice and you can firmly say that your character wouldn’t say or do something, you know you’ve got it. In this way characters are like “imaginary friends” or “voices in your head”, she laughed.

The second question from audience was about writing for adults versus young adults. Yaba Badoe told the audience that her editor defines YA as “12 to 120”, that it’s writing for anyone and everyone. She remarked that YA is a “marketing term” and novels such as Catcher in the Rye and Jane Eyre, generally put in the basic of (adult) ‘classics’, could be considered YA. Sadly, we ran out of time to continue unpacking this question. What is (or isn’t) YA was the subject of a university course I took so I was a little disappointed not to be able to hear more about the authors’ thoughts on it. However, if these selections of readings are anything to go by, YA isn’t afraid to tackle complex topics and is about discovering your voice and place in this often-difficult world. I would highly recommend picking up these authors’ books and giving YA a Go.

Find works in our collection by: