“For strange effects and extraordinary combinations we must go to life itself, which is always far more daring than any effort of the imagination.” - Sir Arthur Conan Doyle 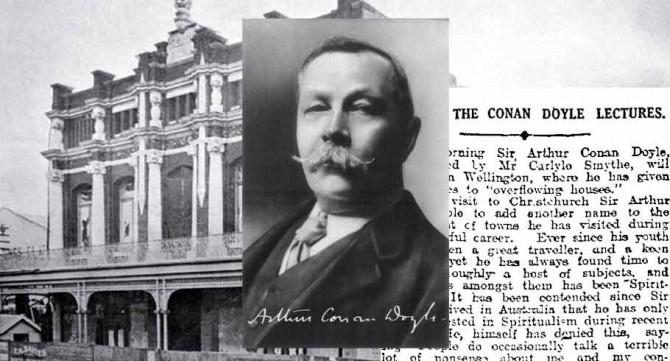 This year marks the 89th anniversary of the beloved author's death. Sir Arthur Conan Doyle's life until his death on 7 July 1930, at the age of 71, was an extremely full and diverse one. His most famous creation, Sherlock Holmes, is undeniably one of the most well known characters in literature, and revolutionised scientific detective fiction. I've been a Sherlock Holmes fan-girl since well before high school, and spent my eighteenth birthday reading my new box set of Sherlock Holmes books while it snowed outside.

Sherlock Holmes in A Study in Scarlet

It was later, however, that I discovered the many surprises in the life of Conan Doyle, and how extremely diverse his interests and accomplishments were. It somehow seems apt to celebrate this on the anniversary of his death.

Conan Doyle was born in Edinburgh, Scotland, on March 22 1859, to Irish Catholic parents. His relationship with his alcoholic father was fraught, but he was very close to his mother, whose gift with storytelling fostered a young Arthur's lifelong interest in stories. When he was sent to a Jesuit boarding school when he was nine, he found the only joys he had were in writing to his mother, and making up stories to tell to his friends.

His experiences after graduating school in 1876 range so widely, from getting a medical degree from the University of Edinburgh (which he, darkly humorously referred to as his becoming "licensed to kill"), to serving as medical officer on ships; publishing his first stories, to seeing Africa and the Arctic.

This only scratches the surface. Without going into too much detail, Conan Doyle was a gifted sportsman, who was a cricketer, boxer, golfer, and one of the first Englishmen to enjoy skiing. His books were originally better known in the United States than the UK, and he was friends with Oscar Wilde, J.M. Barrie (author of Peter Pan), and Harry Houdini, to name a few.

Arthur was truly a Victorian 'renaissance man'; he was writing and publishing books while also running his medical practise, playing sports, travelling (including a visit to Christchurch in 1920), and caring for his wife and children. He later also dabbled in ophthalmology in Europe (his practice didn't get a single patient!); helped to acquit two men sentenced of serious crimes using Holmesian methods; ran for local government twice; volunteered for two wars (the Boer and Great Wars, unsuccessfully); and also wrote numerous fiction and non-fiction books ranging from prehistoric adventures, histories, and spiritualism.

Contrary to popular belief, Arthur Conan Doyle wasn't knighted for his literary prowess, but instead for a pamphlet he wrote on Britain's role in the Boer War. His military contributions are quite impressive, despite the fact that he never served as a soldier (he was a medical officer in the Boer War). Hilariously, most of it came from pestering military men in power, who were often irritated at best by his suggestions. However, his pestering brought about the first form of naval life jackets, and saw soldiers wearing metal helmets and armour before WWI. Sadly, this didn't prevent Arthur's war-time losses; his son, brother, both brothers-in-law, and both nephews all fell in battle.

Conan Doyle was travelling right up until autumn 1929, despite having been diagnosed with angina pectoris (coronary heart disease). After having been bedridden since, Arthur ventured into the garden on a cold spring day, and was found lying on the ground in the garden, clutching his heart with one hand, and a snowdrop flower in the other. His last words were whispered to his wife, when he passed away on 7 July; "You are wonderful".

I tell you, there's nothing makes life so beautiful as when the shadow of death begins to fall across it - Sir Arthur Conan Doyle, in 'Jelland's Voyage'

Here we have an 'imaginary bookshelf'; a selection of items from our collection that would find themselves comfortable on Conan Doyle's own bookshelf, given his interests. His interests were diverse, so you can find anything from medical books and true crime, to books about spiritualism and cricket.