As our city's literary festival, WORD Christchurch, hoves into sight (on 31 August to 4 September) now is a great time to consider what events to go to. One of the more unique literary offerings in this year's festival is a session about... tattooes and it's hosted by none other than Mike, "The Unlikely Librarian", who works at Tūranga on Auahatanga | Creativity, Level 4.

Believe it or not, tattoos and librarians aren't as unlikely a pairing as you might have assumed. The Internet boasts Facebook pages like Tattooed Librarians (over 3000 members), or there's the slightly more inclusive Tattooed Librarians & Archivists Tumblr and there have been multiple "tattooed librarian" calendars (admittedly all American, but still). 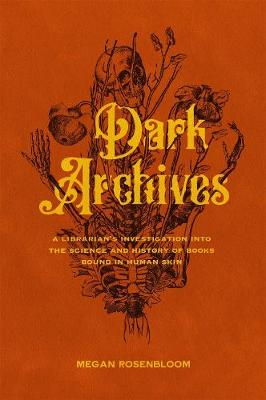 The idea for the event came from a book about "anthropodermic bibliopegy" which is a mouthful but means "books bound in human skin".

So far, so heavy metal.

The book is by a medical librarian (Megan Rosenbloom) who was fascinated but also disgusted by these human-skin volumes owned by Stanford University and wondered if they really were bound in human skin. She eventually set up a research group that goes around the world testing these books. From there Mike's brain leapt to the thought:

Aren't we all books bound in human skin? What we are, as people, are a collection of stories that define who we are.

Which is a really weird way of thinking about it but also, undeniably true.

The guest speakers are all people who are storytellers telling their stories. Mike describes it as "a powerhouse line-up" and again, no arguments from this quarter. Mike is also really pleased to be able to have the session in a space where those stories are created --  as a collaboration between the wearer and the artist -- at Absolution which is something of a Christchurch institution. And perhaps it's an opportunity for people to see that, as Mike says, "tattoo parlours aren't these seedy, scummy kind of places" (Absolution is in the Christchurch Arts Centre) and to maybe become a bit more accepting of tattoos.

In addition to hosting the event in their space, Absolution is also offering, in the two weeks leading up to the event, a discounted rate on literary flash tattoos - you can get your favourite literary quote inked on your person - and some of the proceeds will go to WORD Christchurch so they can continue coming up with innovative and interesting events like this one for Ōtautahi folk.

You can hear Mike talk to Poppia in an interview about Indelible: Tattoo Tales