Tā moko is the name for Māori tattooing and its associated tikanga/practices. At the end of last century, concerned with the decline of tā moko, a handful of Māori carvers began its rejuvenation. As the popularity of tā moko grew, appropriation of motifs and forms by non-Māori required addressing.  Te Uhi o Mataora – a national collective of tā moko artists, was formed to “preserve, enhance and develop tā moko as a living art form and upholding the traditions of the past.” (Toi Māori Aotearoa – Māori Arts New Zealand).

Traditional tā moko used uhi – a traditional bone chisel with a mixture of natural dye. Over time, the bone uhi was replaced with a needle uhi and finally a tattoo gun and ink.

Over the last few years some Kaitā (tā moko practitioners) have revived the use of the bone uhi. 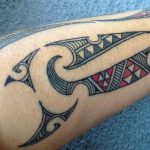 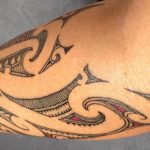 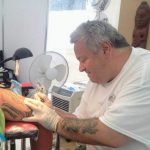 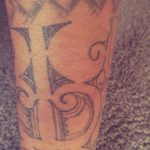 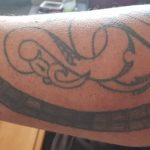 Kirituhi is another form of tā moko. It is a Māori style tattoo either made by a non-Māori tattooer, or made for a non-Māori wearer. Kirituhi has mana/authority and/or prestige of its own and is a design telling the unique story of the wearer in the visual language of Māori art and design. Kiri means ‘skin’, and tuhi means ‘to write, draw, record, adorn or decorate with painting’.

There are different names and meanings for each tā moko and its placement on the body.  For example, male facial tā moko is known as Mataora and female chin tā moko is known as moko kauae or pūkauae. Such tā moko link the wearer to to a number of things including their tūpuna/ancestors, hapū / sub-tribe and the area they are from.