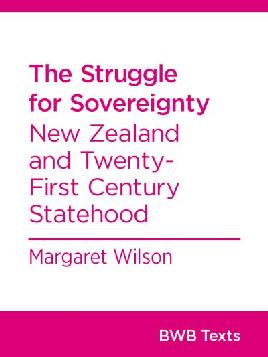 WORD Christchurch Shifting Points of View events at the Christchurch Arts Festival was awesome enough to have Margaret Wilson speak out of her accumulated legal and political wisdom on Sunday 30 August. Bronwyn Hayward, author and political scientist at the University of Canterbury, ably chaired the session.

It's not often that, in your own town, you get a highly accessible ex-Speaker of the House coming to give an intimate talk about critical political issues. And listening to someone with her background had me in awe given that she's the Former Attorney-General, Minister of the Crown, current Professor of Law. Nothing too serious ... 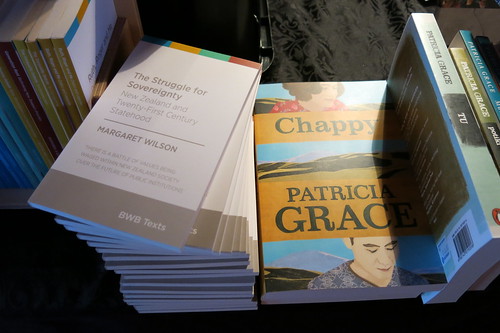 Her exposition at the festival was related to her nifty little book The Struggle for Sovereignty: New Zealand and Twenty first Century State. We have a paper copies and eBooks in the library. This short work provides a concise perspective on how - since the economic reforms of the 1980s - the core parts of the sovereign New Zealand state have been eroded and compromised by globalization and the neoliberal, free-market ideology - basically the deregulation, privatization and legislation which seems to give large business entities powers which don't keep them accountable to citizens.

Mrs Wilson argues that the NZ State: the public service, the legal system and New Zealand's constitution, are (often by default) providing a fertile ground for deregulation which affects society in all sorts of detrimental ways. Over recent years, Government policy has re-ordered the New Zealand economic environment in keeping with the neoliberal philosophy, and this is exemplified in insecure work and the trend towards free trade deals like the Trans Pacific Partnership Agreement (TPPA).

Insecure work - In another basic example of how things are going, Mrs Wilson points out that around 30% (over 600,00 humans) of the NZ work force is employed in "insecure/precarious" working conditions - meaning that such roles are "casual", "fixed term", "zero hours" etc. Which gives employees minimal bargaining rights for better pay and conditions and no certainty with regard to secure hours for the future. She claims this is due to the global neoliberal trend which NZ has adopted and favours "contract work" over "wages", as keeping people on contract keeps them working more efficiently, whereas "on wages" people take too long - so the neoliberal (in)sensibility goes.

The TPPA could potentially enable large multi-national businesses the right to sue the NZ Government if our Government enacts laws which hinder their ability to make money - say if we had legislation which made plain packaging on cigarette packs mandatory - a business may have legal recourse if the courts deemed plain packaging affected their ability to make a profit. 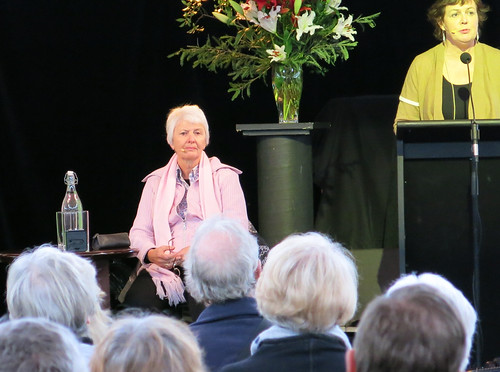 It seems our wonderful Pacific democracy is somewhat undermined - as policy can be rushed or hushed through Parliament without the public knowing or debating the nature of its contents. The Select Committee process can be circumvented due to the policy process being carried out "under urgency" - Parliament can rush through policy faster than normal because of some special "urgent" circumstances. All this basically means it's very hard for the public to make submissions regarding certain policy initiatives. Which is what the Select Committee process is often for.

Margaret Wilson points out that it might be time for Kiwis to really get hold of our State and demand some changes to our Constitution, for example, which could usher in a more robust regulatory regime and pull back the neoliberal economic steam roller so as to make NZ a fairer, more equitable society - maybe resulting in some better contractual conditions and pay for workers somewhere down the line.

However, I asked her if New Zealand even has a "constitutional culture", and she said one of the things which came out of the most recent constitutional inquiry was that Kiwis generally don't have a basic understanding of what a constitution even is because its not taught in schools or referred to and celebrated as a crucial part of our history. Unlike the Americans, who have a very staunch constitutional culture. Just think gun control!

Her book "The Struggle for Sovereignty: New Zealand and Twenty first Century State", is a great tool - a short and to the point read about these technical political issues.

Here's some quotes from her session:

Margaret Wilson's talking about the social welfare state historical evolution as a response to suffrage. #chchfest2015

"The economy is not an end in itself." Margaret Wilson on the struggle for sovereignty. #wordchch #chchfest2015 ^DR

"It's not a hysteria, it's not a resile from free trade, it's an argument for the nation that we might be." @BMHayward #chchfest2015 ^DR

"TPPA - the problem with it is the dishonest way that it's not just a free trade agreement." Margaret Wilson. #chchfest2015 ^DR

TPPA - Margaret Wilson believes "Dairy farmers will be sold out in the interests of getting a political agreement". #chchfest2015 ^DR

Media is owned by people who don't give a stuff about the media. Margaret Wilson #wordchch #chchfest2015 ^DR