The marshmallows flew around the auditorium at Christchurch Boys' High School when Andy Griffiths and Terry Denton came to visit. Brought to you by WORD Christchurch and Pan Macmillan Australia, this event was loud, full of ridiculousness, and an absolute delight for everyone in the audience - young and old alike.

In case you haven't yet been introduced to them, Andy and Terry are the Aussie duo behind the ever-popular Treehouse, opens a new window and Just, opens a new window series, and this event was a chance for them to introduce their latest book, The 104-Storey Treehouse, opens a new window. I went along with McKenzie, who is age 9, and at the perfect age for this show. There was a moment of panic when we arrived and saw the massive queue of people snaking out the school gates, but with the sun shining and everyone in a fun mood, this was a perfect opportunity to relive some of our favourite treehouse stories, and to think about what we would have in our dream treehouse (A room full of drumkits? A giant trampoline? The opportunities are endless!) Inside, there was even a place to draw your own addition to Andy and Terry's treehouse - and who knows? Maybe they'll use your idea in the next book?!

This show was an hour of non-stop laughs, combining visual comedy, stand up, and interactive storytelling. Most importantly, the duo pitched it just right for the mix of kids and adults in the audience. We saw Terry's malfunctioning money-maker spewing out banknotes, contributed to a 'burp bank' that Andy and Terry can use later when they need some burps, and enjoyed watching a parade of silly hats, modelled by volunteers from the audience. Needless to say, the bum hat was a firm audience favourite.

In a live action retelling of a pick-a-path story, we helped Andy and Terry create the story of a child who goes to the dentist and, in true Andy and Terry style, dies a number of horrible, gruesome deaths. The audience loved this! Miss 9 could barely contain herself, kneeling on her seat to see the actions better, shouting herself hoarse, and laughing uproariously from start to finish. Andy's storytelling skills were superb, and Terry's illustrations really brought the storytelling to life.

But you know what? Even that wasn't the most popular bit! The show's finale was all about marshmallows, and I think I can safely say that never has the Boys' High auditorium seen as many pink and white marshmallows as it did in the final minutes of this show. Without going into details, I do not think there was anyone under the age of 15 who was still sitting in their seat at this point. The duo had everyone eating out of their hand, and - if my own experience was anything to go by - the entire audience had sore cheeks from laughing so hard.

This show was an absolute delight, and if the guys come back I highly recommend getting along to see them. Until then, check out some of their books, opens a new window that are available here at Christchurch City Libraries.

If you are looking for more fun, have a look at the family-friendly events coming up in the WORD Christchurch Festival 2018, opens a new window. 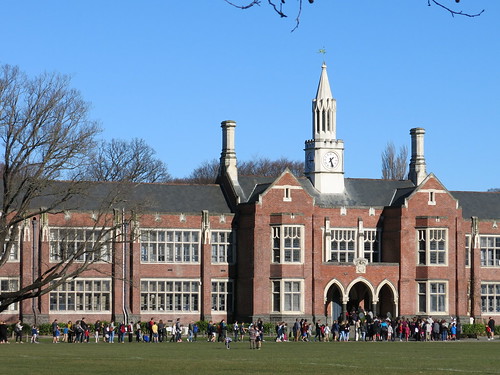