One Christmas when I was a kid, Father Christmas put a book called The Ordinary Princess in my stocking. I just loved that book!

Amy, the princess who was Ordinary, was a mighty girl before that was a thing to be. Her six older sisters were all beautiful, and had wonderful christenings where Fairy Godmothers gave them wonderful, magical gifts. But when Amy (whose real name was Amethyst Alexandra Augusta Araminta Adelaide Aurelia Anne) was christened, one of the fairy godmothers was grumpy, and gave her "Ordinariness" instead. And so ordinary Amy became! She had a snub nose, mousy hair, and freckles, and she totally refused to obey the rules! She had so much more fun than her sisters. And even though none of the Princes wanted to marry her, she didn't care because she thought they were all stuffy old bores anyway. I loved this book so very much that I named my ragdoll Amy...and I named my Lego ambulance minifigure Nurse Marta after Amy's nurse! I even launched into a project to illustrate all 122 pages of the book! I think I got to about page 16... 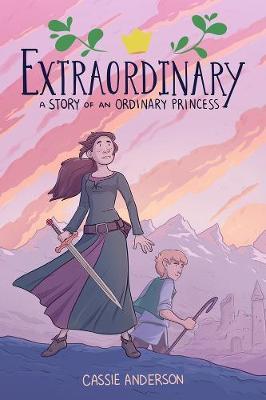 So when I discovered Extraordinary: A Story of An Ordinary Princess in our catalogue, I was intrigued! Would this graphic novel be the fulfilment of my childhood dreams? Or was it a completely different story altogether and the name just a coincidence?

It turns out it's both...and neither.

Extraordinary IS inspired by The Ordinary Princess, but it is NOT an adaptation.

The stories are very similar at the beginning. Both main characters are seventh daughters, both are given the gift of ordinariness by a grumpy fairy godmother, and both sets of parents have trouble marrying the girls off.

That's when the royal mamas both resort to getting in a dragon, and that's when the stories head in different directions. Amy discovers the plan to marry her off to the first prince who can slay the dragon, climbs out her window, and runs away. Princess Basil (she and her six sisters are all names after flowers, not jewels as Amy and her sisters are) on the other hand, does get kidnapped by a dragon, but the dragon is a bit of a wet blanket. She discovers a magic sword amongst his treasures, then climbs out the window and runs away.

And while Amy embraces and revels in her Ordinariness, and forges her own path in her own way, Basil is determined to make her fairy godmother take her ordinariness away.

I do love the illustrations. They have a beautiful "classic princess" look, they really capture the nostalgia Cassie Anderson was going for. And I especially enjoyed looking at the "Extraordinary Sketchbook" that's included at the back. The drawings Cassie started with are lovely soft water colour and pencil sketches, and it was interesting to see how her artwork changed and became Extraordinary.

For me, Ordinary will always be enough. As for the Extra, I could take it or leave.