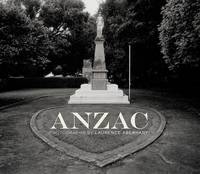 Photographer Laurence Aberhart's latest work is ANZAC, a collection of 70 photographs of NZ and Australian war memorials. Laurence, Jock Phillips (who wrote the introduction to ANZAC) and Christchurch Art Gallery director Jenny Harper discussed the evolving relationship between the community and its war memorials, the changing attitudes to the memorials between the First and Second World Wars and individual monuments and sculptors as part of the WORD Christchurch Writers and Readers Festival.

The relationship between the community and its memorials was a constant theme of the discussion and in a broader way, Laurence's book. Jock said they "made claims to be timeless monuments...[but] the way they are treated and meanings they have change dramatically over time." When they were erected there was an "intense relationship between the community and the memorial", but over time they fell into disrepair as communities developed and moved around them.  Laurence said that the disappearance of some memorials showed that "nothing is permanent. It can all go in an instant."

Jock explained that all local memorials to World War One were community funded and there was a tension between wanting to create something meaningful and sombre and wanting to create something useful in memory of the fallen. After World War Two, the government offered a subsidy for memorials that also served a practical purpose, hence the proliferation of War Memorial community halls, swimming pools and play grounds.

Laurence illustrated the session with beautiful photographs from ANZAC illustrating some of the more remarkable war memorials including:

The session closed with a quote that appears on several war memorials: