There was colour, laughter, and stories galore at Tūranga on Thursday evening  for the New Zealand launch of Samoan Queer Lives, opens a new window.  MCed by well-known fa'afafine Fuimaono Karl Pulotu-Endemann (Member of the New Zealand Order of Merit), this was a joyful and thought-provoking evening that I was proud to be a part of.

In a discussion led by Samoan-born artist and fa'afafine Yuki Kihara, a selection of panellists spoke about their memories, learnings, and observations of the Samoan fa'afafine (LGBT) community. They shared their favourite parts of the book, and reflected upon the experience of reading those stories for the first time, and the way it changed or impacted the way they thought about others, or about their own sexuality or gender identity. Each of the panellists was quite different, both in their relationship to the fa'afafine community and in their professions, which led to a wide range of experiences being shared with the audience.

Yuki Kihara - who took the photographs for Samoan Queer Lives - spoke of the difficulties in finding a publisher for the book, and about the production process. Her co-editor, fa'afafine artist and writer Dan Taulapapa McMullin also skyped in briefly from New York, and it was lovely to have the team together for the launch. Christchurch-based poet Danielle O'Halloran-Thyne, opens a new window did a short reading from her favourite part of the book, and spoke about the use of labels and what we call ourselves, and shared her feelings of finding herself in the 'fa'afafine' label, and its strong link to Samoan culture. From Lana Shields, who had grown up with her uncle Memea Eletino Ma'aelopa Siania, we heard about the first time she read the book, and learnt more about his feelings and experiences growing up as a fa'afafine in Samoa.

Jeremy Faumuina shared his experience of coming to terms with being a minister raising a gay son, and Tagata Pasifika's Stephen Stehlin, opens a new window made an unplanned and well-received appearance, recalling the days of the AIDS epidemic, and about how Samoa's response - treating the LGBT community with respect and honour - helped ensure the fa'afafine community continue to be accepted and highly regarded thirty years later.

The overall feeling of the evening really was one of success, and positivity. From sharing that this book will be the foundation course for a new indigenous queer studies course in San Francisco, and emphasising the move from fa'afafine being viewed in a negative to a positive way, to encouraging full audience participation in the Q&A, especially from those who aren't of Samoan background, this was a beautiful way to spend an evening. These are important stories to share for the LGBT community - young and old, in Samoa and elsewhere - and this book is a wonderful resource with which to do this. 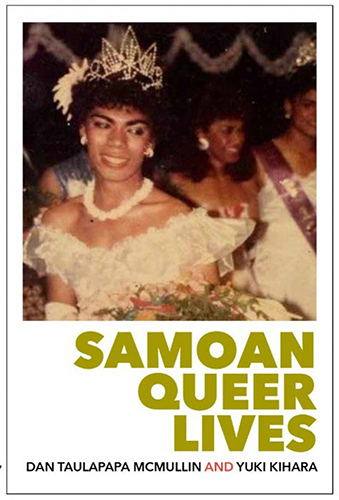