As I make my way up Colombo Street past enticing restaurants, the newly restored Town Hall and Victoria Park Fountain, I think how much more lively Christchurch has become in the few years I've been covering WORD Christchurch events. A year down the track, and Tūranga has become part of  WORD Christchurch Shifting Points of View season, and is proud to be hosting The Great Ngaio Marsh Game Show and Awards Ceremony. 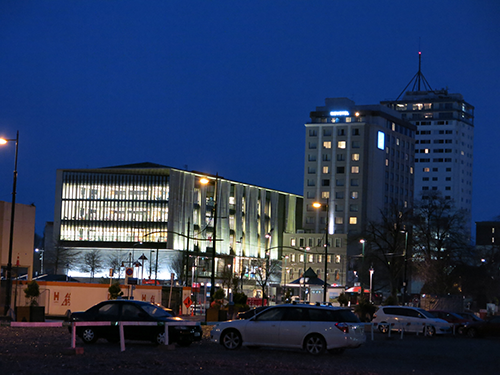 The quiz show itself was excellent fun, with questions thrown out to the audience when the quiz teams couldn’t answer. Rounds included "Name the author", with one picture a hilarious image of a young Val McDermid; "Improvise a Novel" and "Name the TV Crime Show Theme Song" - I won a prize in that one – Val’s latest! No one could guess Blue Heelers.

How the Dead Speak

In the last "Sudden Death" round, the Silver Foxes clawed their way back to a decent showing of 27 ½ points, but it wasn’t enough. The title of “Sharpest Knives” went to Vanda and the John Does with 32 ½ points.

Earlier in the day, I walked across the Avon in very Scottish rain to the (quite Edinburgh-ish) UC Arts Centre, where many of the Ngaio Marsh Award nominees read excerpts from their novels. Anyone there would have agreed at this point that the competition was very tough indeed.

This year there were over seventy nominees, prompting another category: Best First Novel.

This year's ceremony marks ten amazing years in New Zealand crime writing since the awards were founded by Craig Sisterson, who unfortunately couldn't be there to celebrate with us. Award presenters made up for this in spades (see what I did there?) - ripping the wrapping from the awards with great aplomb.

The winner was (fanfare): This Mortal Boy, by Dame Fiona Kidman (followed by clapping) - which also took out the Acorn Foundation Fiction Prize at the Ockham New Zealand Book Awards this year. This Mortal Boy was written about the second to last hanging in New Zealand. A young man, Albert Black, killed another in a fight; prompting concern about youth out of control in the 1950s : a concern that the justice system felt impelled to answer with the harshest penalty.

The winner was: Call Me Evie by J.P Pomare. Call Me Evie is a thriller: the compelling story of a woman held captive for acts she can't remember; unsure if her sometimes violent captor has her best interests at heart. This award is well-deserved. Already displaying a gift with language often seen more seasoned authors, Call Me Evie is gripping, intensely thrilling and keeps the reader guessing until the very end. An exceptional achievement, J.P. was nominated in two categories.

The Cause of Death

The Short Life and Mysterious Death of Jane Furlong

The winner was: The Short Life and Mysterious Death of Jane Furlong, by court reporter and journalist Kelly Dennett - the poignant story of the abduction of a young woman in Auckland, who featured on the television series Sensing Murder.

Congratulations to everyone: authors, organisers and hosts, involved in making this year's Christchurch WORD Christchurch Shifting Points of View season a huge success.

Have a listen to our three 2019 Ngaio Marsh Award winners, Dame Fiona Kidman, @JPPomare, and @KellyDennettNZ talking about their books and becoming part of the #yeahnoir community. @wordchch @penguinbooks_nz https://t.co/QJYX83iDzF

“I’m a crime writer by accident. This Mortal Boy is a crime, rather than a murder story. Albert Black’s death was a crime. I want to remember Albert Black and his mother, who tried so hard to save his life, and his daughter, born three months after his death. As a result of this book, we found her relatives. I also want to thank (husband) Ian Kidman (who died just before the book was published), who was very much a part of it.”

It’s like Christmas is over when the last WORD event is finished.

From the 9th floor

I watch a taxi

dawdle down a wide wet street

A wind drags at a flag: