It was a balmy evening in the city and it felt like all the coolest people in Christchurch were in and around New Regent Street on Saturday night. And why wouldn't they be with so much choice as to free literary entertainment happening care of WORD Christchurch?

It's always a tricky task deciding what you'll go along and see at the pop-up festival as there are numerous pop-up locations and readings happen simultaneously but I was feeling in a short stories frame of mind so that helped to narrow my options. So I stopped in initally at Metamorphoses at Youngs Jewellers, followed by Monsters in the Garden at Rollickin’ Gelato.

The first featured essa may ranapiri reading an essay (essa-y?) on "bad takes about gender". Being trans and Māori there was a crossover into colonisation too, but also... insecticide. To my ear it was more poetry than traditional essay but it had plenty to say and I was happy to listen.

I just want to lie on a beach and not think about any of this s**t.

Next Rebecca Nash, who looked like she'd been on a harbour cruise that had gone horribly wrong - "I've got my life jacket on in case it all goes to s**t" - read a couple of brutal and graphic stories from her life. Whoa.

After this I needed a bit of a breather so popped down to Rollickin' Gelato to see what kind of sci-fi short stories were on offer. Most of the readings were from the new Monsters in the Garden: An Anthology of Aotearoa New Zealand Science Fiction and Fantasy and Elizabeth Knox acted as host and MC.

Owen Marshall, who I wouldn't normally have associated with science fiction (a point that he himself made stating that people like to put writers into boxes) read a fascinating story about medical science finding the key to immortality but the rub is that it doesn't work for everyone, creating a schism in society.

Next Christchurch writer, A. J. Fitzwater read a disgusting but humorous tale called "How to build a unicorn" followed by Octavia Cade who read an intriguing excerpt, set in space, from her book The Stone Wētā.

Novelist Pip Adam, claiming she'd dressed up "as my author photo" for Halloween, read a tale of android women who are exactly like real women right down to their being habitually raped and murdered. It sounds grim, and on one level it was, but it was also bloody funny.

Knox herself read a fantastical excerpt from an unpublished Margaret Mahy manuscript (which Knox said suffered from Mahy's close association with children's and YA literature - this pre-dating big adult/youth crossover titles by Phillip Pullman and J. K Rowling), which I wasn't expecting and was quite the treat for a Mahy fan. 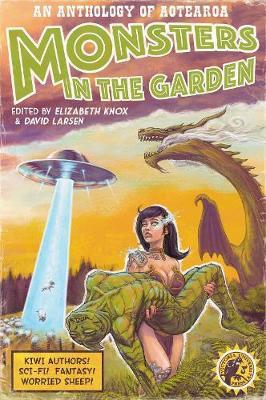 Definitely the readings from this pop have made me even more keen to get my hands on the Monsters in the garden anthology when it hits library shelves.

Find work in the catalogue by: