Oh boy what an awesome festival the WORD Christchurch Writers and Readers Festival is! Exciting in the extreme. I was drenched by the time I got to my first event; Poetry readings at Scorpio Books. A packed house, and great poetry. The winner, Danielle O'Halloran, gave a fantastic live performance.

Next up a change of shoes for a very rainy Oratory on the Ōtākaro / Avon, with Joseph Hullen (Ngāi Tahu, Ngāi Tūāhuriri)

The walk follows significant sites from Puari Pa, which stretched from the Hospital to Kilmore Street, and reveals another cultural layer buried under Christchurch, literally. Remains of Tupuna (ancestors) have been found in Cathedral Square, under the old Library (Gloucester Street), and under St Luke's Church (Kilmore Street).

Ngāi Tahu are driving a project to restore, beautify and rebuild the river, which was choked with sediment post quakes. Native life, such as Inanga (Whitebait) and Tuna (Eel) are coming back to the Ōtākaro to thrive. The installation of 13 Whariki Manaaki; tiled patterns based on traditional weaving designs, "weaves a Ngāi Tahu narrative into the rebuild." (Joseph Hullen)

After a very welcome afternoon tea, it was time to go to the launch of Leaving the Red Zone, a collection of poems inspired by the Canterbury earthquakes. Joanna Preston's poem, 'Ministry of Sorrow' was especially moving and powerful. Included is the poem, 'Rebuild' by one of the Library's own poets, Greg O'Connell. 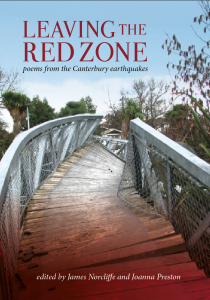 Feeling like festival flotsam, I made my way through crowds of excited festival goers to The Power of Poetry. Featuring Bill Manhire, Selina Tusitala Marsh, C.K Stead, Fiona Kidman, and Ali Cobby Eckermann, this event was a highlight. In the Concert Hall at the Piano, I'm in the company of literary giants. Ali's poetry from an Aboriginal perspective is powerful and poignant. I loved Selina's sound and repetition : t t t t t...d d d d... and her swagger.