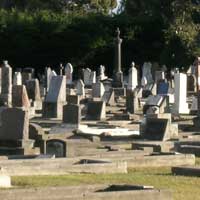 In 1913 the Christchurch City Council sought to expand the amount of land it had laid out in cemeteries. Opposition from residents and the Heathcote County Council prevented the city from extending one of its reserves, Linwood Cemetery, onto adjacent land on the Buckleys Road-Butterfield Avenue corner. This second reserve set aside for an abattoir is now occupied by Bromley Park.

The city council examined its options: an extension of Waimairi Cemetery and the establishment of a crematorium at Linwood Cemetery while the town clerk and city surveyor found that, in part of the Bottle Lake Reserve, the water table was too close to the surface to allow it to be used for burial purposes.

The council-owned Reserve No. 211, 25 acres, 3 roods and 33 perches in extent, was at the corner of the Canal Reserve Road [Linwood Avenue] and Bromley Road in Heathcote County and had been set aside for smallpox hospital purposes. The council decided that it would provide cemetery land for many years and, in February 1915, the Reserves Committee took steps to have the purpose of the reserve altered to that of a cemetery.

In January 1917 the council called for tenders for the removal of the cottage on the site and the soiling of the new surface. By May a well had been sunk and a three-roomed cottage, which would serve as the sexton’s house, relocated. Alterations to the cottage included "Additional room, veranda and all conveniences, including painting, outside and inside, papering and electric light".

In July 1918 the cemetery was pegged out and opened for burials. The price of a plot was the same as at the Linwood Cemetery. The opening of the cemetery coincided with the outbreak of the influenza epidemic. The new cemetery became the main burial place for victims on the eastern side of the city.

In 1930 the city council extended the cemetery by a further 40 acres. This was in spite of a petition from residents who feared that their properties would lose value; opposition from the Linwood Avenue School committee who thought that the extension would have a detrimental effect on the education of the children; and a complaint from the Heathcote County Council that Bromley was becoming a dumping ground for anything which the city did not want within its own boundaries: the sewerage farm, cemeteries and reserves.