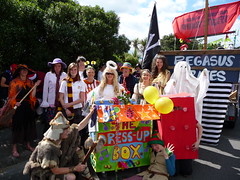 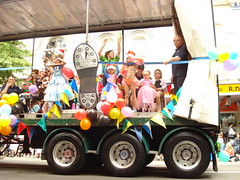 In the 1930s, T. J. Armstrong & Co created floats for parades. They also had a Toyland inside their High Street shop (situated where the CPIT Jazz School now stands).

One parade used an elephant, a gimmick used elsewhere when the circus came to town.

According to the official Santa Parade website the Christchurch Santa Parade was started by well-known retailer James Hay in 1947. His son, Sir Hamish Hay, in his autobiography, puts the year at 1948.

The Hay’s Parade was a popular annual event for families. The Hay’s retail store had a dedicated children’s playground, Hay’s Roof, for many years.

For many years the Hay’s Santa Parade featured the popular character Aunt Haysl. There were four Aunt Haysls, but the best-known was Edna Neville, who retired from the role in 1981.

Christchurch City Libraries has an archive of Aunt Haysl material known as the Aunt Haysl papers, which were compiled by Edna Neville. You can explore our Papers index for newspaper articles about Aunt Haysl.

The New Brighton Library team takes part in this every year. Here are some photos from previous parades.