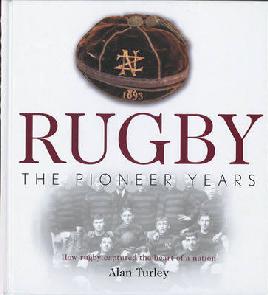 This page is a brief history of the beginnings of rugby in Christchurch. It covers the pre-1900 development of the sport and links to further reading.

Rugby is an upper-class school in Warwickshire, England, where modern rugby started. Student William Webb Ellis’s contribution was not to handle the ball, which was acceptable, but to run forward with it rather than move backward and kick. His name is now on the Rugby World Cup trophy.

In its early form rugby was a kicking game. Mauls were a stacks-on-the-mill melee of any number of players; 1 and players hacked or kicked their opponents shins. Participants drove the ball over the opposition goal line for a touchdown and individuals drop-kicked the ball over the bar.

The game embraced a disregard for personal safety and epitomised the doggedness and … pluck that were elemental facets of the English public school spirit 2.

In 1845 students created a set of rules. Twenty-six years later, lawyer and former Rugby pupil Leonard Maton drew up the rules which are recognised today. Perhaps because he was nursing a broken leg sustained in a rugby match, Maton outlawed the practice of hacking.

Charles and Croasdaile Bowen – two students fresh from Rugby school – emigrated on the Charlotte Jane. Croasdaile tried to teach his Christ’s College fellows the Rugby version but the youths hacked him. 3

An 1854 Lyttelton Times article describes the populace indulging in rustic sports … jiggling matches, jumping in sacks, pig racing [and] foot-ball 4 — the last doubtless a working-class form of the game.

In August 1863, Christ’s College met the ‘Gentlemen of Christchurch’ in a 22-a-side game'. Although some sources say the first match was at Cranmer Square, newspaper notices of the time give Latimer Square as the venue. After two hours, the struggle ended in a draw. The Christchurch Football Club was then established. The members, all part of the establishment, included Croasdaile Bowen, now Vicar of Riccarton. However, the club was dominated by political, business and sporting heavyweight, Richard Harman. Although Harman had been to Rugby, the game which his men adopted was a mixture of soccer and Victorian (now Australian) rules. 5

Charles Monro and the first official match in Nelson

While a pupil at Christ’s College School, in Finchley, London, Nelson youth Charles Monro became a keen rugby player. On his return to New Zealand, Nelson College and the Nelson Football Club adopted and played the game under his supervision.

On 14 May 1870, in the botanic gardens in Nelson, the school and club played the first game of rugby in this country; using an oval ball and the Rugby rules.The youngsters were … outmatched, the heavy weights proving too much for their lighter, though exceedingly active, opponents. 6.

Monro arranged the first inter-provincial match — between Nelson and Wellington — and coached and played till 1875. Later he farmed in the Manawatu, taking no part in rugby. Nevertheless, he remained conscious of his seminal role in the history of the game. When the Dominion anointed another as founder of the sport in New Zealand, he snapped: I am not disposed to sit quietly … and allow my claim to be jumped …. 7.

Canterbury first to have a rugby union …

Kindersley Camilo Montague Lewin, who had been educated at Shrewsbury School and Cambridge University, was another rugby fan. In Christchurch from 1873, he brought together men who had played the game in England and challenged the local football club to a fixture under rugby rules as now played in the Old Country. 8.

On 30 May 1874, the football club played its first rugby match. Club members did not take kindly to the new system of picking up and bolting when and how you could 9.

However, they quickly adapted to the wrestling [and] scrimmaging 10.

Lewin, ever the skilled strategist, was, perhaps, pleased that his team was thrashed. In 1875, the Christchurch club defeated a touring Auckland team and decided that it would adopt rugby rules from 1876.

The annual North Canterbury-South Canterbury game took place, at Timaru, on 26 July 1879. The town’s support of rugby owed much to it being the home of Alfred Hammersley, formerly captain of the English international side. After the match, at the Grosvenor Hotel, Lewin successfully argued for the establishment of the Canterbury Rugby Football Union, the first in the country. The eight-club union encompassed the area from Rangiora to Timaru.

Lewin looked forward to unions from other provinces joining Canterbury and establishing a nationwide body. Much later Lewin stated that his move was a pre-emptive strike against the feared encroachment of Victorian rules in Canterbury and, afterwards, possibly, New Zealand. 11.

… but one of last to join national body

In 1892 Ernest Hoben created the New Zealand Rugby Football Union. Ironically, Canterbury — along with Otago and Southland — refused to affiliate. The consequences were devastating.

Canterbury was barred from playing with teams which belonged to the union. The annual Timaru match was outlawed — South Canterbury had formed a separate union in 1888 — and players could not take part in international games.

Canterbury climbed down and joined the national body in 1894, the last of the rogue provinces submitting the following year 12.