Cecil Malthus World War I papers [letters, telegrams, documents]
A collection of Malthus’ letters has been digitised and made available online by Christchurch City Libraries. The letters are penned to his future wife, Hazel Watters. Malthus died on 25 July 1976. This collection of letters and documents dates from April 1914 to his discharge in April 1917. The collection is not complete, and portions of some letters are missing. The letters follow Malthus’ progress from training in New Zealand to his experiences throughout the war, including time in Egypt preparing for Gallipoli, and his time in France. Malthus was injured in September 1916 and returned to New Zealand in March 1917. 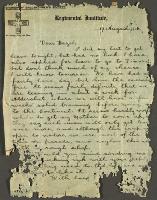 Ward, C. (ed.) Dear Lizzie: a Kiwi soldier writes from the battlefields of World War 1
Letters from Ira Robinson to his sister, Lizzie Baldwin, describing the daily life of an ordinary soldier. Robinson served on the Western Front, especially at Passchendaele.

Brown, E.P. (ed.) Your loving son, Don: letters home to North Otago from Sergeant Don Brown, VC
Sergeant Don Brown, an Oamaru farmer, served in France in 1916. He was killed in action on 1 October 1916 during the battle of the Somme, and awarded a Victoria Cross posthumously in June 1917 for his gallantry during that battle.

Boyack, N. Behind the lines: the lives of New Zealand soldiers in the First World War
Social history of soldiers’ experiences, based on private diaries and letters.

The library holds a series of newspapers / periodicals published on board some of the troopships which carried New Zealand servicemen to Europe. These papers contain news of happenings on board and include lists of the soldiers on the voyage. Some of the titles are listed below: