This teaching resource aims to raise awareness of the impacts and causes of the First World War. It is focused on Canterbury and Christchurch’s involvement with the war from 1914-1919 and highlights some of the resources available through Christchurch City Libraries. This pack has been designed to be used with Years 7-10 students with information that could easily be adapted for older students. 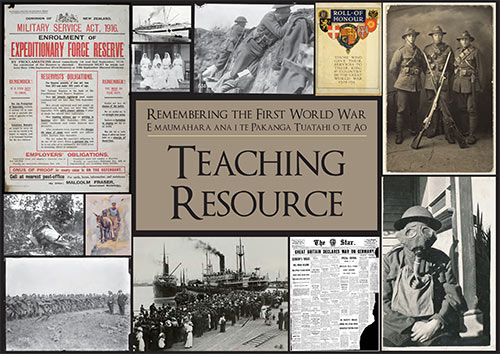 The resource contains links to booklists accessed through Christchurch City libraries online catalogue. There are also links to library eResources; to access these you will need a library card and password / PIN.

This resource is aligned with the visions and principles of the New Zealand curriculum, and the suggested activities encourage students to be connected and actively involved learners. The resource content reflects the principles of the Treaty of Waitangi and Cultural Diversity. Whilst the resource is primarily focused on the specific learning areas of Social Sciences, English, and the Arts, there are links across many aspects of the curriculum. The variety of activities included are designed to allow opportunities for all of the key competencies and values to be met.

The Road to War

Animals in the War

The End of the War 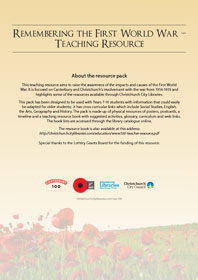 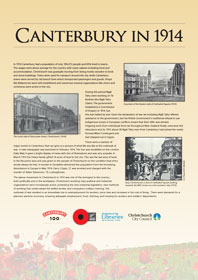 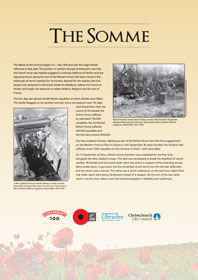 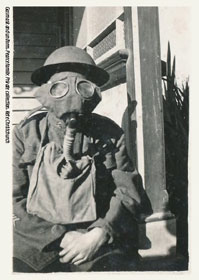 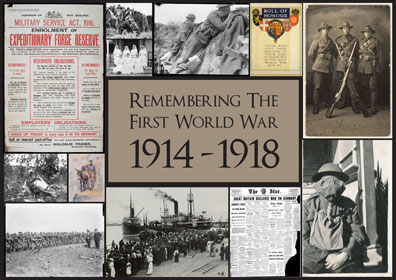 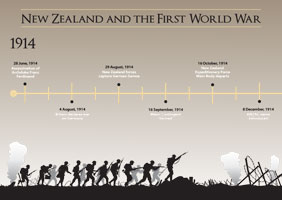 Alliance
An agreement to work together made between two or more countries.
Allied Powers (Allies)
The nations who fought against the Central Powers. At the start of the war the main Allied Powers were Britain (and its empire), France and Russia.
ANZACs
An acronym used to describe soldiers from Australia and New Zealand. It stands for Australian and New Zealand Army Corps.
Armaments
Weapons and equipment used by a military force.
Armistice
A formal agreement between opposing sides in a war to stop fighting.
Artillery
Large guns, such as cannons, mortars and rockets.
Badge
An emblem (a small piece of cloth or metal) that signifies your status rank or affiliation with an organization or support for a cause.
Barrage
A heavy concentration of artillery fire, sustained for a period of time.
Battalion
A large military unit, often containing between 300 and 1000 soldiers.
Baxter, Archibald
Well known conscientious objector from Dunedin who was sent to the front line and punished for refusing to fight.
Blockade
Tactic used to prevent food and supplies from getting in or out of a city or port.
Bombardment
A heavy attack or artillery fire.
Canterbury
A province that in 1853 ran from Waitaki to Hurunui Rivers, and from east to west coasts. The region now known as Westland became a separate province in 1873.
Campaign
A military operation
Casualties
A person injured or killed in a war
Cavalry
Soldiers mounted on horseback.
Central Powers
The nations who fought against the Allies. The main Central Powers were Germany, Austria- Hungary and Turkey.
Cenotaph
A monument commemorating people who died in a war.
Civilian
A person who is not a member of the armed forces.
Conscientious Objector
A person who refuses to join the military on the grounds of moral or religious beliefs.
Conscription
Compulsory military service. Conscription was introduced in New Zealand in 1916, as there were not enough men volunteering to join the war.
Dardanelles
A narrow strait of water in northwestern Turkey connecting the Aegean Sea to the Sea of Marmara.
Division
A large military formation consisting of a number of smaller units.
Dog tags
The informal name given to identification tags worn by military personnel.
Dug- outs
Underground shelter used for rest and living space in the trenches.
Eastern Front
The combat zone in Eastern Europe fought over by Russian forces on one side and forces from Germany and Austria- Hungary on the other.
Empire
A group of countries under the control of another country.
Entente
An informal agreement or alliance between two or more countries.
Fatalities
Those killed in action or died of wounds in war.
Flanders
A region in Belgium and the site of the Third Battle of Ypres.
Front Line
Area where part of an army is closest to its enemy and where fighting takes place.
Gallipoli
First battle where New Zealand and Australian (ANZAC) troops supported British and French soldiers in an attempt in 1915 to capture the Gallipoli Peninsula in Turkey
Gangrenous
Rotting skin.
Great War
Another term for the First World War, generally used between the world wars.
Home Front
The term used for civilians that supported the soldiers while away at war.
Infantry
Soldiers that fight on foot
Influenza Epidemic
Influenza (flu) spread through New Zealand between October and December 1918 killing over 8,000 people
Kaiser
The emperor of Germany
League of Nations
A diplomatic organization set up in the aftermath of the First World War.
Lusitania
British passenger ship sunk by a German U- boat in 1915.
Massey, William
Served as New Zealand’s Prime Minister during the First World War
Mobilization
Preparation of a national military force for war
Morale
Confidence or spirits of a person or group
Munitions
Weapons
Neutral
Impartial, does not take sides
No Man’s Land
Term used to describe the dangerous, often battered, and usually narrow ground separating enemy trenches
Occupy
Take control of a place or country by military conquest
Origins
The point or place where something begins
Offensive
A major attack
Owen, Wilfred
British soldier who has become the most well- known poet of the First World War.
Pacifism
A belief that conflict should be settled by peaceful means
Pandemic
Health epidemic of global proportions
Papers Past
Digitised pages from New Zealand newspapers published between 1839 and 1945
Passchendaele
Battle on the Western Front in October 1917 with horrific loss of New Zealand lives, part of the Third Battle of Ypres
Propaganda
Information designed to promote or damage a political cause
Rank
Level or position
Reconnaissance
Search for information about enemy positions on either land or sea through observation
Regiment
Unit of the army often divided into companies, squadrons or battalions
Reparations
Post-war payments made by the losers to the winners to pay for wartime damages
Shell Shock
Medical condition caused by the prolonged and distressing experiences of trench warfare
Somme, Battle of
Battle beginning in July 1916 which saw huge casualties on both sides, particularly for the Allies on the first day. New Zealand troops first saw action on the Western Front during this battle.
Sniper
A rifleman or woman who takes shots at enemy soldiers from hidden cover
Tactics
Plan of action or strategy to achieve a specific outcome
Treaty
An agreement between countries
Trench Foot
Rotting disease of the foot caused by prolonged exposure to the cold and dampness of the trenches
Trench Warfare
Type of warfare where two sides fight each other from opposing trenches
Triple Alliance
The military alliance formed in the late 1800s between Germany, Austria- Hungary and Italy. This alliance went on to become Central Powers, but Italy later renounced it and joined the Allied Forces.
Triple Entente
The military alliance between Great Britain, France and Russia.
U-Boat
German submarine
Western Front
Combat zone mainly in northern France and Belgium in which a significant portion of land fighting occurred during the First World War.