This page explores the history and tikanga of harakeke, and how it is harvested and woven.

Harakeke (and wharariki) is of the genus Phormium and is a leaf fibre, while flax is of the genus Linum and is a bast fibre (fibre comes from the stem). The two plants have no relationship to each other. Those involved in the resurgence of traditional weaving encourage use of the correct terminology i.e. harakeke, not flax. Harakeke is native to New Zealand, Tasmania and Norfolk Island.

Harakeke was prized by Māori and used for a multitude of purposes. Woven garments incorporating harakeke were worn by most people. The harakeke fibre was used for ropes, fishing lines and net making. The plant’s nectar was used as a sweetener, the dried flower stalks were lashed together to make mōkihi (rafts), and the pia (gum) and boiled roots were used for medicinal purposes.

Harakeke was later recognised by European settlers for its superior value as a fibre. The hardy harakeke plant was incorrectly labelled ‘flax’ by the newcomers. Flax mills extracted the fibre for export overseas in what became a very lucrative market.

Wharariki has softer more pliable leaves that are prized for use in smaller more delicate work. 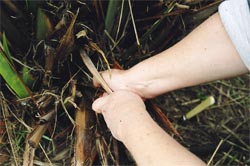 There are many cultural and spiritual elements associated with harakeke, its harvesting and its uses. It is important to understand and recognise the indigenous knowledge associated with the plant. The tikanga around harvesting harakeke is grounded in common sense and protects the welfare of both the harvester and the harakeke plant itself.

Māori usually say a karakia (prayer) when harvesting leaves for use. In the karakia, thanks is given for the plant as well as asking that no harm come to the plant, to the harvester or to whoever will work with the cut material or the finished article. The karakia focuses the mind on the task at hand and acknowledges the harakeke as a taonga.

The most important aspect of harvesting harakeke is ensuring that the blades are cut correctly.

Māori speak about the harakeke bush as a whānau (family group). Harakeke grows in a fanlike pattern the rito or ‘baby’ leaf at the centre of the fan is identified as a tamaiti ‘child’ and the āwhi rito ‘parent’ leaves which flank it on either side are the guardians. This group of leaves is never taken. Only the leaves third or preferably fourth from the centre, considered as the tupuna ‘grandparent’ leaves, are cut.

This way the whakapapa of the plant is protected because the rito ‘baby’ and its āwhi rito ‘parents’ are retained to produce further ‘generations’ of growth - through sustainable harvesting the plant will continue to flourish. The whānau share common roots and derive strength and stability from forming part of a larger whole.

E hara taku toa, I te toa takitahi ēngari he toa taku tini
My strength is not from myself alone, but from the strength of the group

When the heart is torn
from the flax bush
where will the Bell bird sing?
You ask me
what is the greatest thing
on Earth
My reply is
it is people people people.

This whakataukī defines the human person as the most important element in the universe. It is quoted often in speeches and whaikōrero to emphasize the mana and tapu of humankind. It also acknowledges human fragility, interdependence and dependence on other parts of the creation: if you pluck out the heart of the flax bush where would the bellbird sing?

Hear Ranui Ngarimu speak about the Karakia and listen to the Christchurch City Council Waiata Group sing it on our page about the Janet Stewart Reserve Pā Harakeke.

In early times the art of weaving was essential to Māori. The whāriki (mat) for covering the floors of the whare, the kete or kono for carrying or preserving kai as seen in the pōhā tītī, the hīnaki (trap) for snaring eels, the piupiu and the korowai to clothe and adorn the body, and the tukutuku - the decorative panels on the walls in a meeting house were all woven using harakeke.

Weaving is acknowledged as having its own life force and is accorded a level of respect depending on the mana of the weaver and the qualities of the weaving process.