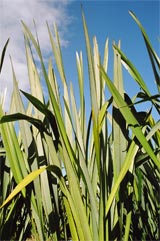 Ranui Ngarimu (Kāti Māmoe / Ngāi Tahu / Ngāti Mutunga) has had an interest in weaving since she was a child. She is an expert weaver and is involved in the restoration of kākahu for a number of prominent Ngāi Tahu whānau. When interviewed in 2005 she was the Chair of the national weavers collective Te Rōpū Raranga Whatu O Aotearoa.

Christine Heremaia worked for the Greenspace Unit at Christchurch City Council where she was the Styx Project Area leader. During her time with the Council she was extensively involved in waterways and wetlands management including the establishment of the Janet Stewart Reserve.  She passed away in 2014.
Listen to Ranui Ngarimu’s Weaving Journey [3.7MB MP3]

Cross the Styx River bridge on Marshlands Road and you catch a fleeting glimpse of a mass of green blades — a lush plantation of harakeke. In early winter, the blackened kōrari flower heads appear etched against the sky. Pūrākaunui (the Styx River) meanders through this 1.9 hectare roadside oasis which provides a tranquil repose for visitors and native wildlife alike.
Christine speaks about the Styx River project [5MB MP3]

The Janet Stewart Reserve was officially named in 1996. Since that time, the flat, willow bordered paddock has been transformed into a thriving habitat for bush and wetland birds. The Reserve is on land generously bequeathed to Christchurch City Council by Edmond Stewart on condition that it be developed as a public reserve and named after his mother Janet. The restoration of natural landscape features in Janet Stewart Reserve is part of the wider Styx River project which involves the ongoing development of a Styx Mill Conservation Reserve.

The final form of the Janet Stewart Reserve evolved to include the creation of a lake, jetty, walkways and car park. Native plantings were used to provide a habitat feature for the reserve. The boxed waterway was released to form a large pond that was surrounded by riparian planting. 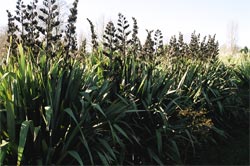 Janet Stewart Reserve incorporates an extensive Pā Harakeke — a planted area of special flaxes suitable for traditional Māori weaving. It is named Te Kōrari and is a taonga (treasure) for the Christchurch weaving community.

The council worked closely with a group of local weavers and Landcare Research in the planting of this pā harakeke. Te Kōrari is one of a number of pā harakeke plantings established on reserves around Christchurch for weaving purposes. The harakeke at Janet Stewart originates from plants in the Foxton flax milling area. They were initially grown in Christchurch as part of a research project and when no longer needed, were transferred for planting at Janet Stewart Reserve in 1998.
Ranui speaks about the varieties & uses of harakeke & wharariki [2.9MB MP3]

Several varieties of harakeke (phormium tenax) and wharariki (phormium cookianum) grow at the reserve. Harakeke has a strong fibre and is traditionally used for making whāriki (mats), kete, pāraerae (sandals) and the fibre (whītau or muka) is extracted for kākahu (cloak) making. Some of the readily identifiable varieties of harakeke growing in Te Kōrari at the Janet Stewart Reserve are kohunga, ruapani, taeore and makaweroa.

Wharariki has softer more pliable leaves that are prized for use in smaller more delicate work.

Ka nui te Harakeke, ka ua te ua.
When the harakeke plants are plentiful, it is a sign of much rain.
Ranui speaks about the management of a pā harakeke [5.7MB]

There are many cultural and spiritual elements associated with harakeke, its harvesting and its uses. It is very important to understand and recognise the indigenous knowledge associated with the plant. Learn more about the tikanga of harakeke on our harakeke page.

In early times the art of weaving was essential to Māori. The whāriki (mat) for covering the floors of the whare, the kete or kono for carrying kai, the hīnaki (trap) for snaring eels, the piupiu and the korowai to clothe and adorn the body, and the tukutuku - the decorative panels on the walls in a meeting house were all woven using harakeke. This marvellous and various plant grows in abundance here at this Pā harakeke, Te Kōrari in the Janet Stewart Reserve.

Weaving is acknowledged as having its own life force, and is accorded a level of respect depending on the mana of the weaver and the qualities of the weaving process.

This whakataukī defines the human person as the most important element in the universe. It is quoted often in speeches and whaikōrero to emphasize the mana and tapu of humankind. It also acknowledges human fragility, interdependence and dependence on other parts of the creation: if you pluck out the heart of the flax bush where the bellbird would sing.

A permit is required to harvest flax from this area. Please contact Christchurch City Council to obtain a permit or more information about the pā harakeke.