A guide to information on New Zealand women’s service in World War Two. All the sources listed are located in the Aotearoa New Zealand Centre, although there is borrowing copies of some of the below items. 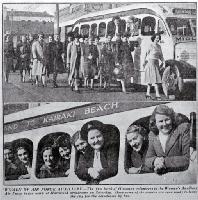 Petrie, N. From kiwi land to tropical island: Noeline’s story, 1940-45
Noeline and Daphne Petrie served as land girls, then joined the WAAFs. They were stationed at Wigram, then Noeline continued her service at Woodbourne and in Fiji.
The WAAF book: a scrapbook of wartime memories
Illustrated account of the work of the WAAFs; history in New Zealand; off-duty activities, ranks, pay and uniform. Contains notes on some individuals (pp. 65-87), with longer articles on June Howden, Lassie Hume, Bettie Loe, Irene Marriott, Frances Byers, Esther Cochran, Jean Price.