Over 500 nurses, about a quarter of the nursing workforce of the period, served overseas during the First World War as members of the New Zealand Army Nursing Service. Information on these women is available in the following sources. 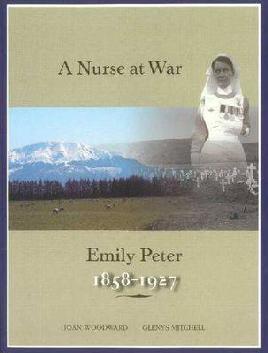 Rees, P. The Other ANZACs: Nurses at War 1914-1918
The experiences of New Zealand and Australian nurses on the Western front and Gallipoli.

Rogers, A. While you’re away: New Zealand nurses at war, 1899-1948
Chs. 3-10 cover the first World War. Ch. 10 looks at the repatriation of nurses after the war, and the problems many of them faced after the challenges of frontline service disappeared. The author has used many personal reminiscences, letters and diaries as sources.

Shannon, L. Lorna Aylmer Rattray and the Nurses of the Marquette Commemorated in the Christchurch Nurses' Memorial Chapel

Smith, J.M. Cloud over Marquette
The troopship ship, Marquette, with a large number of nurses on board, was torpedoed and sank in the Mediterranean in 1915. Ten nurses were drowned and several others injured.

Woodward, J. A nurse at war: Emily Peter, 1858-1927, 2008
Cantabrian Emily Peter served in Serbia and in England during World War I until her health started to fail. Includes extracts from her diary and letters from some of those she nursed.

Martin, A.A. A surgeon in khaki
Author served on the Western Front.

Murr, J. The Maheno and the Marama and the White Fleet: New Zealand hospital ships, World War One
Postal history. Postcards, postmarks and other postal markings for correspondence to and from hospital ships. Includes details about the work of the ships, pp. 30-47.

O’Carroll, B. Khaki angels: Kiwi stretcher-bearers in the first and second world wars, 2009
World War 1: pp. 15-81. Includes extracts from war diaries of James McKenzie and citation for his Military Medal.

Christchurch Nurses Memorial Chapel
Information on the chapel which was inspired in part by the sinking of the Marquette.