Early settlers in Canterbury saw the potential of the area for wheat growing and the flour milling industry was important right from the first days of settlement.

Daniel Inwood brought with him from England a flour mill ready for use. He erected this mill where the Waimairi Stream crosses Straven Road. Another early flour mill belonged to William Bray of Avonhead.

The Christchurch Girls’ High School is sited on property where the Riccarton Mill once stood. The founder and builder of the mill was William Derisley Wood who arrived in Lyttelton aboard the Randolph, the second colonising ship to arrive here in December, 1850. He was born in 1824, in Suffolk into a family of millers and travelled to NZ expecting to die here as he was thought to be suffering from tuberculosis. These fears proved unfounded as he lived to 80 years; he was probably suffering from lung congestion, common among millers of the day.

At first Wood worked as a secretary for John Robert Godley, first Provincial Superintendent. In 1856 he made a short visit to England, returning with a wife and prefabricated windmill. This was a seven-storey tower mill with four huge sails with moveable canvas slats. His first flour mill was built at the end of Windmill Road (later Antigua Street) in 1856. Sydenham settlers grew wheat which they threshed with flails and trundled in wooden handcarts to the mill.

It was not long before the windmill could not keep up with the demand for flour in Christchurch. Wood realised that to keep his share of the market he would need to set up a water-powered mill and so he secured a "water-right" to use the Avon River at Riccarton.

He initially applied to build his mill in the middle of Hagley Park. Fortunately for future generations a site at the end of the present Wood Lane, at a loop in the Avon River, was acquired by leasing (and later buying) land from the Deans Estate trustees. The Wood family home was built next to the flour mill. Wood Lane, not formed until 1949, was the drive to their home and a footbridge over the mill race connected its gardens to the mill.

The mill race was cut across the loop and a weir was built to form the Mona Vale mill pond. It used the 1.5m fall of water to drive a 4m wrought iron water wheel.

In 1860 Wood’s first water-powered mill on the site began producing flour. Grain was milled between imported French burr stones and, as had been the case with the earlier windmill, the demand for flour soon outstripped the supply, despite six 24-hour days being worked weekly. In 1880 steam turbines of about 40 horsepower increased the mill’s capacity and the output was doubled. Steel rollers were installed in 1889.

Eventually the whole operation was transferred to Addington in 1891, although the original mill remained.

Richard Allen (?1860-1930) bought the property in 1896 and re-built it using steam power together with water. Electric motors were introduced in 1915. The mill was now known as the Riccarton Roller Flour Mills, producing a well-known brand of flour, Snowball Flour. The Cyclopaedia of N.Z. 1903 tells us the plant has a capacity of six sacks per hour, and about nine hands are employed. Business was done throughout the day.

Fleming and Co of Invercargill bought the mill in 1918. Richard Allen stayed on near the mill until his death in 1930 at his residence, "Mill House", 25 Fendalton Road. Wood Lane was yet to be formed.

Throughout the following decades the main products of the mill were poultry and stock food. Succeeding owners were the Northern Rolling Mill, the General Foods Company and finally Watties Industries. In 1971 the mill was damaged by fire and closed soon after. Demolition was carried out in November 1974, ready for the new Christchurch Girls’ High School, this despite pleas from Wood’s descendants asking that the original mill be spared in the belief that it was the oldest surviving water-mill in N.Z. No trace remains except for the weir which can be seen (and heard) from the rear of the Mormon Church in Fendalton Road. 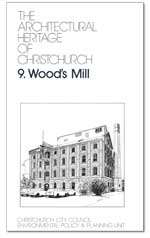