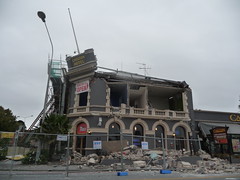 The Carlton Hotel stood for 150 years on the corner of Bealey Avenue and Papanui Road. The area is widely known as Carlton Corner. It was the home of New Zealand’s first tap beer and also sported the first beer garden in the country. The hotel was demolished following the 22 February 2011 earthquake. A new hotel opened 20 September, 2013. This page includes a brief history of the site and links to further reading.

Edward Gibbon Wakefield owned Rural Section 6, a property of 50 acres (20.2 hectares), to the north of Bealey Avenue and the west of Papanui Road. He bequeathed it to his son, Jerningham Wakefield. According to Te Ara, Jerningham died in Ashburton, clouded by alcoholism.1

In 1863 Alfred Money bought the land and the first Carlton Hotel gained a licence — though the building was not completed till 1865. Money’s hotel was well placed to provide accommodation for farmers, and secure yards for their stock. A hotel market lasted till the Addington stockyards were built in 1874.

Money employed capable people to run the hotel, however the plain two-storey building became old and bedraggled. In 1902 it was sold to Ward’s Brewery and demolished.

In 1909, Alfred Money then aged 80, fell and died as he stepped down from a tram outside the hotel.

The name ‘Carlton’ originated in a Tory gentlemen’s club founded by the Duke of Wellington in London, in 1831. At one stage the club was located at Lord Kensington’s house at Carlton Gardens.

The second incarnation of the Carlton hotel was designed by architect Joseph Clarkson Maddison who often designed plain, utilitarian abattoirs and hotels. His Carlton design, in the Italian Palazzo style, was different — one of several which Maddison designed so that the city could show a cheery face to visitors to the 1906-07 International Exhibition. Maddison also designed Warner’s Hotel (1881), the Clarendon Hotel (1902), the Government Buildings in Cathedral Square and Mona Vale.

In 1927 the property was bought by Alfred John and Elizabeth O’Malley. Although both were dead by 1929, the family retained control, most notably through the influence of Alfred Roy O’Malley.

A ‘first’ in the country came in 1940 when the hotel drew beer directly from a bulk tank. Later, beer taps on flexible hoses were introduced. In 1947 a beer garden with planted archways and a high fence was built on the hotel’s sunny north side. It was a first for New Zealand. Yet another first was the 1954 introduction of an American concept — the drive-through bottle store at the rear of the complex. The O’Malleys also introduced fluorescent strip lighting.

Roy O’Malley’s daughter was a nurse, while his sons were a sharebroker and priest respectively. Having no-one to succeed him, Roy sold the property in 1976 for a sum in the region of $1,000,000, to Inns of Canterbury. Roy died in 1992, aged 85.

In the 1990s the Carlton complex covered eight times the area of the Maddison building. Entrepreneurs continued to renovate the site and a bar and restaurant, garden bar, offices and a Burger King outlet complete with drive-through facilities were established. The district had developed a down-at-heel appearance and much improvement was made with the building of Carlton Mews to the west of the car park. The mews featured 24 retail and office units with a pre-cast structure clad with Oamaru stone.

Since 1981 the hotel had been a Category 2 building on the Historic Places Trust’s register,a place of historical or cultural heritage significance or value.

Owners downplayed or emphasised the building’s heritage status as it suited them. The Trust sought the retention of the four chimneys because they were a visual reminder of old cooking and heating methods; the owner noted that protection was afforded only to the facades and took the chimneys down. However, when the hotel was offered for sale in 2003, it was marketed as a landmark that has got cash flow and good leases in place. 2

Badly damaged during the 4 September 2010 earthquake, the hotel remained open. In the 22 February 2011 quake, part of the façade collapsed into Papanui Road. The hotel was demolished on 9 April. An article Carlton Hotel rebuild begins was published in The Press on 26 November 2012:

The third incarnation of the Carlton Hotel has opened. Construction of the new building on the corner of Bealey Ave and Papanui Rd finished in July 2013.

The new two-storied hotel has been designed by Chris Prebble Architects in a modern style with zinc panelling and plate glass.

This article based on original work by Richard L. N. Greenaway.