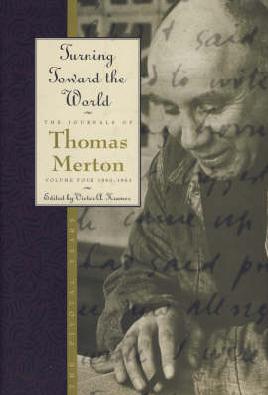 Thomas Merton was a Trappist monk who achieved world-wide fame as a writer on spiritual matters and as a dedicated civil rights activist in the 1960s. Although he never visited New Zealand he had strong family roots in Christchurch and Christ’s College in particular.

His father Owen Merton was a student at Christ’s College from 1895 to 1903. Owen’s father Alfred was music master and organist at the College from 1879 to 1918 and his grandfather Charles taught there briefly in the 1850s before founding his own school at Rangiora. Owen Merton went to Europe on leaving school to pursue a career in art.

Thomas Merton was born in France. He had a difficult childhood, including the death of his mother when he was only six, and his father when he was sixteen. He went to Clare College, Cambridge but dropped out. He rejected religion, drank heavily and pursued women.

In 1935 he resumed his university studies at Columbia University in New York. He studied languages and became a Catholic in 1938. He then studied to become a priest and was ordained in 1949. He became a Trappist monk (Trappists are a branch of the Cistercian order who follow a austere regime of prayer, contemplation and work). The Abbey of Gethsemani at Trappist, Kentucky became his home. He was active in the life of the abbey and as a writer for many years. For three years from 1965 to 1968 he lived as a hermit in the grounds of the abbey.

Merton was a published poet but it was his writings on spiritual contemplation that made him well known. He was a prolific writer, his many books sold well and were widely translated. Since his death there has continued to be extensive publishing of his writings. Probably his best known work was his autobiography, Seven Storey Mountain, published in 1948. In the 1960s he was involved in peace and civil rights movements in America. His teachings and writings on the issue of race, non-violent protest and the evil of war earned him much criticism but also made him a guru to many young people in America. He studied other religions, becoming deeply interested in Zen Buddhism in particular and was keen to promote inter-religious understanding. He engaged in spiritual dialogues with Dalai Lama, Thich Nhat Hanh and D. T Suzuki. He died on December 10, 1968, in Thailand when he was electrocuted by a faulty fan.

His work lives on in the activities of the International Thomas Merton Society, which has branches in many countries and includes a branch in Christchurch. The branch organised a memorial service in the Christ’s College chapel on December 10, 2008, to commemorate the 40th anniversary of his death. The Anglican and Catholic bishops of Christchurch attended and there was singing by the choir of Villa Maria College.

Christchurch City Libraries has a special collection of books, pamphlets and papers by and about Thomas Merton. The collection began in 1969 with donations from two of his aunts, Agnes and Beatrice Merton, who lived in Christchurch. The Library has added significant new publications since and currently holds 179 items. The Thomas Merton collection is held in Store and is not available for loan but copies of the most significant of Merton’s writings can be borrowed from the main library collection. The full extent of the collection can be viewed by searching our catalogue for Merton Collection.

Thomas Merton's writings in our catalogue
Thomas Merton
Profile of his life and works in Contemporary Authors.
Use at a library or enter your library card & password / PIN.
International Thomas Merton Society Christchurch Chapter
Contact details for the chapter from CINCH
Abbey of Our Lady of Gethsemani
The Trappist monastery that was his home until his death.
Thomas Merton Center
The official repository of Merton’s artistic estate which includes over thirteen hundred photographs and nine hundred drawings in addition to his writing. The Center, at Bellarmine University, archives over fifty thousand Merton-related materials.