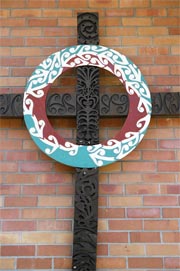 Among the first Catholic Missionaries to arrive in New Zealand were Marist priests who accompanied Bishop Pompallier in 1838. Many such priests were sent into mission work in Māori communities where they learnt Te Reo Māori and developed a strong understanding of tikanga. Priests from the Society of Mary (known as Marists) have traditionally focused on establishing the Church in new places and rejuvenating existing Church communities. The existence of Te Rangimārie can largely be attributed to this Marist kaupapa a strong advocate for the establishment of Te Rangimārie was a Marist priest, Pā Wall.

Up till the late 1960s, Marist priests from the Wellington diocese ministered to Māori in the South because there were no Mission priests based in Te Wai Pounamu. These priests had experience working in North Island Māori communities, could speak Te Reo and understood aspects of tikanga. Pā Wall was a well known and respected Marist priest who regularly travelled to Christchurch and throughout the South Island to celebrate mass in Māori, for Māori in the 1960s. Pā Wall recognised the need to establish a Catholic base for Māori in Te Wai Pounamu. He discussed this with Ngāi Tahu elders and together they spoke to Bishop Brian Ashby about the possibility of establishing a Catholic Māori Mission in Christchurch.

The need for a centre in Christchurch was considerable. Prior to the building of Te Rangimārie there was nowhere for city Māori to have gatherings such as tangihanga. Also, the recent arrival of many young Māori from the North Island to attend Trade Training Schemes in Christchurch precipitated the need for a venue that would provide facilities for youth (particularly those new to Christchurch) to meet and practice their faith and their culture. Te Rangimārie was initially established as a Māori Youth Centre and had a close relationship with Te Aranga, the Catholic Māori boys’ hostel in Woolston.

Funds for Te Rangimārie Centre were raised from second-hand shop sales at Māori Mission opportunity shops, a Māori concert, a fete and a carnival. Gifts were also donated by the Christchurch Catholic diocese and other dioceses around the country. Many Ngāi Tahu, other Māori and Pākehā families were involved in the establishment of Te Rangimārie. Some people travelled long distances on a regular basis to contribute their energy and expertise to the process of setting up the Centre. 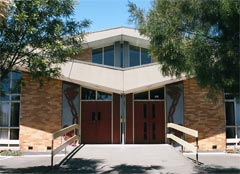 Te Rangimārie means peace and happiness. The building was designed by the prominent Christchurch architect Paul Pascoe. The building design references traditional Māori architecture. The windows at the top of the building facing out are the eyes of the house etc. It was built in 1969 at a cost of about $100,000. The Centre incorporates a chapel, hall and dining room. The chapel is consecrated to the Immaculate Heart of Mother Mary.

Te Rangimārie was officially opened on 8 March 1969 by the then Governor General Sir Arthur Porritt and blessed by the Roman Catholic Bishop of Christchurch, the Most Rev. Brian Ashby. Boys from Rehua hostel and from the recently opened Catholic Māori hostel, Te Aranga led the pōwhiri. Members of the local Māori community and Māori visitors from other parts of New Zealand attended the opening celebrations. 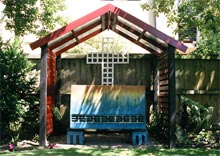 The carved panel on the chapel wall, the crucifix, the original concrete altar, the tabernacle and the manaia at the front door are the work of Norman Lemon (Te Whata) who was an inmate at Paparua Prison when Te Rangimārie was built. The tukutuku panels were woven by apprentice weavers learning the craft. Other small carvings were done by another inmate at Paparua, for Sr. Katarina Mariu to bring to the Centre.

The original altar is today located in the garden adjacent to the centre which enables Mass to be celebrated outdoors on special occasions such as at New Year.

What Happens at Te Rangimārie? 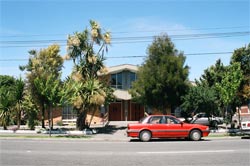 In its early days Te Rangimārie had a strong focus on youth. This changed when Government funded Māori Trade Training schemes ceased. Te Rangimārie then began to be used as overnight accommodation by visiting sports and cultural groups. Other local Māori and Pākehā community groups also used the centre. Educational groups have operated from Te Rangimārie since the 1980s. Te Rangimārie hosted the first Kohanga Reo in the South Island which opened in 1982, Te Reo Māori classes using the ‘Rakau’ method which began in the early 1980s and Te Kura Whakapumau (the total immersion school now based in Opawa) also began life at Te Rangimārie. In 2005 a crèche and ESOL classes operated regularly from the Centre.

The practice of the Catholic faith in a Māori way is the major focus of Te Rangimārie. Mass is celebrated in Te Reo Māori every Sunday and all are welcome to attend.