This page features extracts from a recorded interview with the late Dr. Terry Ryan speaking about Rehua Marae. This interview was recorded in 2004.

Dr. Terry Ryan was the Secretary of Rehua Marae. In 2004 he marked 30 years as the Kāwai Kaitiaki of Ngāi Tahu Whakapapa (an acknowledged authority on the contemporary whakapapa of the Ngāi Tahu people). In 2001 he received an honorary Doctorate of Science Degree for his contributions to genealogy and in 1994 he was awarded the MBE on the Queen’s Honour List ‘for services to the Māori community of the South Island’. He was the Kaumatua for Christchurch City Libraries.

Amid the stately character homes and modern townhouse developments of Christchurch's Springfield Road sits Rehua Marae. Flourishing tī kōuka and harakeke mark the driveway and entrance to the marae. Visible from the street are glimpses of the deep red carved barge boards and ridgepole of Rehua’s wharenui Whatu Manawa Māoritanga o Rehua.

Puna or fresh water springs emerge from the ground at Rehua setting the site apart as a place of special significance. The formation of these puna and the myriad other waterways of Te Wai Pounamu is attributed in whakapapa to the ancestor Tūterakiwhānoa whose raking of the waka (the South Island) punctured it allowing the water beneath to flow through. The puna at Rehua would have once provided fresh water for the Ngāti Māmoe / Waitaha people who lived at the ancient Puari pā situated near the centre of Christchurch.

Rehua began life as a hostel for girls and then boys at its initial site in Stanmore Road in the early 1950s. Rehua means heavenly guardian and ‘Rehua’ is one of the heavens that the spirit passes through after it leaves the body. The hostel accommodated young Māori apprentices who came to Christchurch under the Māori Apprentices Trade Training Scheme at the Christchurch Polytechnic.

The scheme was instituted by prominent members of the Hāhi Wēteriana (Wesleyan/Methodist Church) and other Ngāi Tahu elders including, the Rev. Wera Couch, the Rev. Wilf Falkingham and Mr Joe Moss. The scheme was the first of its kind in New Zealand and an acknowledgement of the already longstanding relationship between Te Hāhi Weteriana and Ngāi Tahu. The Rehua Māori Apprentices Hostel provided the young men training in their various trades with cheap accommodation in a community based and Christian atmosphere.

In 1952 the hostel moved to the present day site in Springfield Road. Extra accommodation was built as the number of new trainees increased to around 70 men. The Rehua ‘boys’ were known for their musical and rugby prowess and the Rehua concert party performed all over Canterbury raising funds for Rehua and raising the hostel’s profile in the community. The kinship and community spirit felt among residents of Rehua is evident in their personal accounts of time spent there.

Decision to build a wharenui

Through the efforts of the Methodist Church and Ngāi Tahu elders, planning began for the building of a wharenui at Rehua in 1955. Subsequently, construction and carving of Te Whatu Manawa Māoritanga o Rehua began in 1957. At that time it was over one hundred years since a carved wharenui had been erected in the South Island. All the Canterbury marae were consulted about the building of the house and it was decided at a meeting at Rāpaki in 1959 that the wharenui would be representative of all the tribes in New Zealand.

Te Whatu Manawa Māoritanga O Rehua was largely built using the voluntary labour of the apprentices and others who were interested. Many local firms donated construction materials and the tōtara used for the 40 carved poupou and epa was donated by Okains Bay farmer, Murray Thacker. 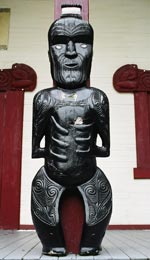 Carving and the design of tukutuku panels was overseen by Henare Paikea Toka. He was helped by his wife Mary Toka (an expert in the weaving of tukutuku panels) and by Joe Kingi from Northland. Other carvers who were employed to carve the poupou and epa lived and worked at Rehua for over a year. Fibre for weaving the tukutuku was brought from the bush at Arahura in Westland and used to craft the 1200 square feet of tukutuku panels that decorate the interior of Te Whatu Manawa Māoritanga o Rehua today. These tukutuku are the work of women from Rāpaki, Taumutu, Wairewa and Ōtautahi.

A committee of people from throughout Canterbury was formed to paint the rafters and ridge panels as well as to name the poupou. It was decided to include carvings representative of all the waka that had brought Māori to New Zealand. On the inside of both end walls are Ngāi Tahu ancestors. On the ridge pole of the house above the porch is Tahupōtiki, ancestor of the Ngāi Tahu people, while on the righthand side facing the building is Porourangi of Ngāti Porou and the elder brother to Tahupōtiki. On the left hand side of the porch is Tamatea Ariki, the captain of the Takitimu waka who was also the ancestor of both the Ngāti Porou and Ngāi Tahu tribes.

Te Whatu Manawa Māoritanga o Rehua was opened in 1960. The lifting of tapu was performed by representatives of the Waikato tribes led by Princess Piki (Dame Te Atairangi Kahu) who represented her father King Koroki, whose poor health prevented his attendance. Visitors from all the tribes in Aotearoa were present. Later the same morning, the house was opened by the then Prime Minister Walter Nash and other officials accompanied by Sir Eruera Tirikatene. Thousands of people took part in the celebrations that continued over the following four days.

A new accommodation block, called Te Kōti Te Rato after an early Wesleyan Māori clergyman, was opened in 1966, the Wharekai (dining room) in 1977 and four kaumatua cottages in 1987. 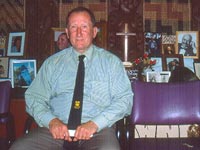 Since being built, Te Whatu Manawa Māoritanga o Rehua has attracted numerous important gatherings, hui, tangihanga, tourism, political meetings and Central (Methodist) Mission functions. Among the bodies that have worked from or at Rehua are the Waitaha Cultural Council, under Te Kiato Riwai, the Ōtautahi Football Club, the Rehua Kohanga Reo (the first in the South Island) and Rehua Marae Social Services.

Rehua hosts many visitors every year from primary school children to royalty - in 2002 Her Majesty Queen Elizabeth 2 visited the marae. Rehua continues to be a centre for recreation, social occasions and worship. Its stance as a multi-tribal and multi-cultural marae make it a place where people from all backgrounds may find a common unity.