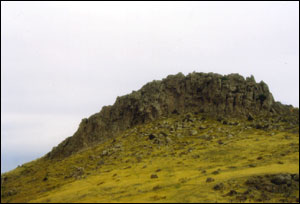 Known to Māori as Te Upoko o Kurī meaning the dog’s head, the canine profile of this craggy knoll is quite recognisable from Te Whakaraupō (Lyttelton Harbour).

Europeans possibly named it Witch Hill because of the tapu traditionally associated with the area.

On the flanks of Te Upoko o Kurī is a huge wall of rock called Te Whakatakanga o te Karehu a Tamatea meaning The place where Tamatea’s fire ashes lie.

Legend says that the Māori explorer Tamatea found himself without fire nor means of making any when he came to the Port Hills. He and his companions were freezing cold as a huge storm had broken. Tamatea called out a karakia from the hilltops asking that sacred fire be sent from the volcanic lands of the North Island.

The chief’s prayers were answered and a magic blaze of fire appeared on the slopes of Te Upoko o Kurī. This sacred fire was called Te Ahi a Tamatea meaning the Fire of Tamatea. Its warmth saved the lives of Tamatea and his fellow explorers.

The following day when Tamatea left this spot to continue his journey, he declared that it should be known henceforth as Te Whakatakanga o te Karehu a Tamatea.