On Thursday 16 July in Tūranga, ‘Between the Waters’ - Polish Legacy in New Zealand Charitable Trust' celebrated one Kiwi's big contribution to Poland's legacy in New Zealand. This individual is poet, historian, and storyteller Margaret Copland.

Margaret Copland is a direct descendant of Canterbury’s Early Polish Settlers who disembarked from ‘Friedeburg’ in Lyttelton in August 1872 and were, among others, part of a wave of assisted immigration which saw New Zealand’s settler population double to about 500,000 during the 1870s.

For over twenty years, Margaret has promoted the legacy of Poles in New Zealand whilst celebrating her own Polish ancestry. In 1990, whilst working at the Christchurch Botanic Gardens telling Māori and Celtic stories, the opportunity arose for Margaret to create and deliver a one hour programme on European settlement in Canterbury. Drawing inspiration from her ancestry, Margaret told this story through the eyes of her great great grandmother (Sarah Stokes), who came to Canterbury from England, and her great great aunt (Rosalia Gierszewski), from the Pomeranian region of Poland, who travelled onboard the ‘Friedeburg’ to Lyttelton in August 1872.  Since then, Margaret has brought their stories to life for more than 100,000 people, in venues around the world, from Christchurch Botanic Gardens, to tourist groups in the United States.

In recognition of her outstanding achievements, Margaret was awarded the Badge of Honour ‘Meritorious for Polish Culture’  by the Ministry of Culture and National Heritage of the Republic of Poland. The ceremony hosted by ‘Between the Waters’ - Polish Legacy Trust was attended by over 80 guests, including Christchurch's Deputy Mayor, Andrew Turner, and Polish Ambassador His Excellency Mr Zbigniew Gniatkowski. Both men spoke movingly of the integral role of Polish settlers and migrants to the development of Canterbury - from building new developments, to ensuring their children and grandchildren were raised in safer situations than where they had come from. As Ambassador Zbigniew Gniatkowski said, Margaret's storytelling celebrates and honours the story of not only her ancestors, but of all the European ancestors who made a new life for themselves and future generations of New Zealanders:

"We gather here to acknowledge Margaret Copland's valuable contributions to the promotion of Polish culture in New Zealand. Margaret's ancestor, Rosalia Gierszewski, was one of the early arrivals from Poland who settled in Marshland. It is a great opportunity to pay tribute to Margaret, and to all those first Polish immigrants who worked tirelessly to tame the wild coastline and mainland, to make it hospitable for themselves 150 years ago and for the future generations." - Ambassador Zbigniew Gniatkowski said.

A special thanks to Dorota of  'Between the Waters- Polish Legacy in NZ Charitable Trust’, for her contribution to the writing of this post, and for the wonderful images. 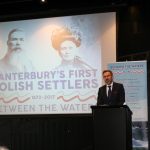 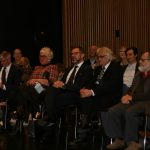 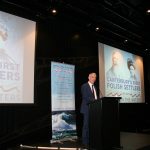 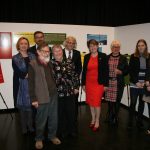 The awardee, Margaret Copland, with VIPs and members of the Polish Legacy Trust 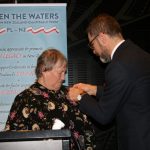 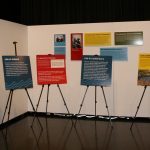 Pop up exhibition with Polish national (Kashubian) costume and information on early Polish settlers to Canterbury. 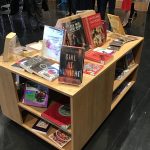 A display of books about Poland and by Polish writers, from Christchurch City Libraries’ collection