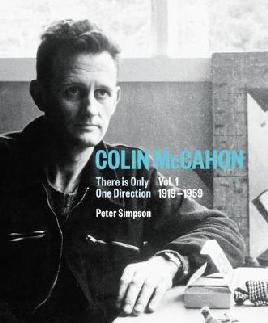 It’s my first time at a WORD Christchurch event. I'm a little excited, and very aware that at 25, I am the youngest person in the theatre at Christchurch Art Gallery, by a fair few years. Not to matter, I, like everyone else in the densely packed and rather warm room, are here to learn about Colin McCahon. We have gathered to listen to the author, Peter Simpson and art consultant Grant Banbury talk about Simpson's two part biography Is this the promised land?

The talk starts at the start of the second biography -1960. By the end of the hour, we had followed a chronological narrative up until McCahon's death in 1987. It seems that through his process of writing these biographies, Simpson was able to ascertain a private view of McCahon, one of a man who was keenly intelligent, devout in both his religion and artistic pursuits.

Colin McCahon (1919-1987) is widely known as one of New Zealand's best twentieth century artists. His paintings hold a dramatic type of power. Featuring emotional, bold landscapes, to biblical symbolism and text, painterly abstraction, and at times an uneasy use of Māori motifs (which I noted, was quickly passed over). Credited as the artist that brought modernism to Aotearoa, McCahon saw New Zealand as, ‘A landscape of splendour, order and peace’ (Quotes Simpson, he is so well versed in this subject, it is admirable).

I am enjoying hearing Simpson talk, full of small side stories, hints about works and recent discoveries. Simpson explains that McCahon’s paintings changed every time he moved house. It seemed that he was keenly aware of his surroundings. Even though in his later years the work tends towards both text and abstraction, Simpson points out to us that both these styles have elements of the real phenomenal world, and that for McCahon, his strongest aim was to ‘communicate the New Zealand landscape as a luminous, divine, and full of deeper meaning.’ Placing events from Christ's life into the New Zealand landscape, McCahon wanted to challenge the sensitivities of the public, examining the nature of faith and language. Seeing the works on the slideshow, I understand how sensitive McCahon was to his artistic language - adept at layering multiple meanings and iconography within a frame, the work speaks in both a bold language but also one of a soul who was so deeply immersed in his world that it was inevitable that it would eventually come to a sad end.

And it did, at 67 McCahon died. Living out his later years with Korsakoff Syndrome, a type of dementia that comes from alcoholism. We are left wondering - if this man had better support would we have had many more years to enjoy his work? Or is it the fact that he was so persistent about his mission, we might not have had the art. I guess we will never know.

Did you know - you used to be able to borrow an original Colin McCahon painting from OUR LIBRARY?