WORD Christchurch and UC College of Arts joined forces to present How To Be a Feminist, a live broadcast from the Sydney Opera House’s All About Women festival on International Women’s Day, Sunday 8 March.

You can watch the Sydney panel discussion here:

The panel was ably chaired by Rosemary Du Plessis.

Dr Gina Colvin identified as a "womanist" and spoke about Mormonism, and women as the "first voice on the marae".

Sionainn Byrnes, president of UC FemSoc spoke of the university as a "site of struggle". Women are disproportionately represented in departments that are under attack, and there is a general "erosion of local democracy". She mentioned a sanction of uni clubs meaning they can't say anything against other clubs.

Kait Nelson is a trans-health advocate and she said "Feminism has always suffered from matters of privilige". As a trans feminist, she said "We all share the same misogyny; we're in the same battle". Kait talked about the trans community wondering whether it should stay within the LBGT community, as maybe there are more commonalities with feminism. She observed the lack of trans women on the Sydney panel and made the valid point "Nothing about us without us".

Beck Eleven, journalist at The Press, called herself a mini-feminist with training wings. Her eyes were opened last year after working on a feature Modern feminism - do women have equality? "The minute you start paying attention, you see systematic oppressions." Domestic violence is 84% men against women, but there are always the people who say "But men are hit too".

Dr Erin Harrington's area of expertise is popular culture. She raised the point that every time we spend money on something, we are giving it a tick of approval - something to consider when there are sexist books and movies. Do we want to endorse them? We could try challenging ourself in our viewing and watching. We also need to "be careful about our own internalised misogyny".

There were a variety of the comments from the floor, and the kind of free and frank talk that fits what Gina Colvin called these "delicious" and "half kitchen-table" conversations.

"Choice feminism" is not good, as it emphasises only a narrow, hyper-individualist empowerment. Feminism's strength in its collective nature - it needs to include young and old, women of colour, trans women. As Roxane Gay said "We have to take all women with us when we smash the system".

Photos from How to be a feminist 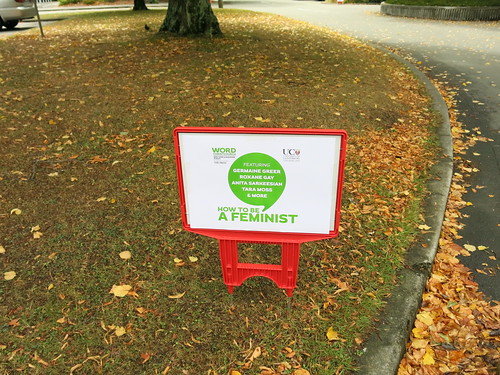 If you missed our great #IWD2015 event yesterday, fear not! You can read about it in today's @PressNewsroom, page 2. pic.twitter.com/A76FkS6uz8