Unlike the fantasy novels that George R.R. Martin is most known for, Nightflyers is a science fiction novella set in deep space in the far future where Earth and the solar system have become the subject of myth and superstition. 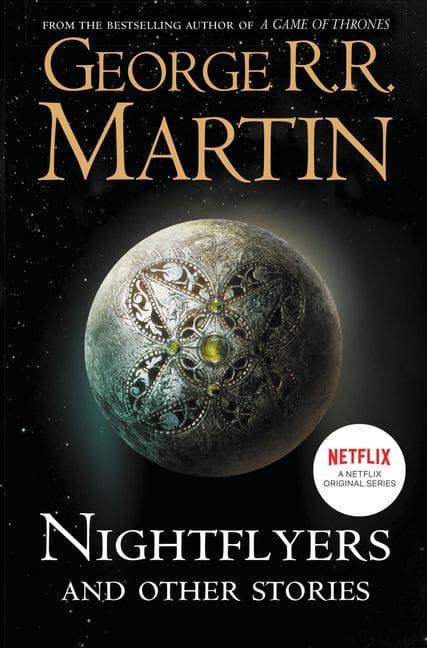 The story sets out a premise that lays the framework for an existential foray into the nature of human life and its potential relationship with all other forms of life that exist in the galaxy. A team of scientists set out in search of an ancient and legendary alien race called the 'Volcryn' and search for what secrets they may hold about the origins of the galaxy and sentient life itself. The starship “Nightflyer” captained by the enigmatic and mysterious Royd Eris is their means of transportation for this voyage. From here, things slowly begin to unravel as dark secrets about the ship and the ship's captain slowly reveal themselves as horror begins to be unleashed on the ship's patrons.

At its core, Nightflyers is a horror story fitting easily within the canon of both the horror and sci-fi genres. Certain passages of the book also invoked a similar feeling to reading Stanislaw Lem's cult classic Solaris; fans of this novel will definitely find Nightflyers an enjoyable read.

George R.R. Martin is an author who has found success in repeatedly challenging genre tropes, Nightflyers continues this trend. An incredibly dark sci-fi story, Nightflyers is a atmospheric journey though deep space. Metaphorically, this could be viewed as an exploration into the dangers of an overly eager scientific enquiry that results in peril befalling those involved. It could be seen as a gruesome “curiosity killed the cat” fable. Nightflyers is not for the fainthearted with its excessive gore. George R.R. Martin's almost trademark unceremonious disregards for the well-being of the characters he has created.

Philosophers such as Edmund Burke and Immanuel Kant wrote about the sublime; a concept that, described simply, attempts to explain the experience of the human condition that is simultaneously horror and awe, a feeling of spectacular anguish and excitement, fear and astonishment. George R.R. Martin's Nightflyers has moments that could be described as philosophically sublime.

This is a very readable and compelling story, fans of sci-fi and horror alike will definitely find Nightflyers an enjoyable read and given the the beautiful simplicity of George R.R. Martin's writing style even fans of other genres should find the story engaging. For fans of George R.R. Martin, Nightflyers could well tide you over until he finishes the next part of A Song of Ice and Fire.

If you are thinking of watching the Nightflyers Netflix series, reading this is a great way to prime yourself; I sure know I am more excited about it than I was before I finished this book.

Nightflyers was originally published as part of a volume of short novellas in 1980, this 2018 edition is a stand alone edition of the extended version of the story.
Nightflyers
by George R.R. Martin
Published by HarperCollins New Zealand
ISBN: 9780008300760