Deborah Challinor has been writing best selling, historical novels for twenty years. Her latest, The Leonard Girls, is set during the Vietnam War. Missbeecrafty asks Deborah about this story of two Kiwi sisters with very different views on the war. 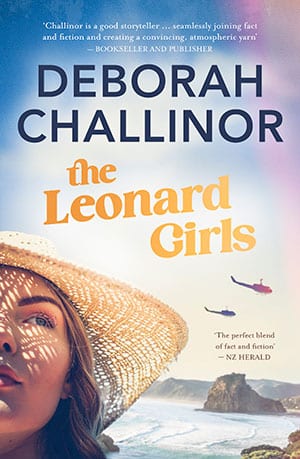 Missbeecrafty: In your Author Notes, you talked about what it was that started you on your Vietnam odyssey. So, rather than ask where the journey began, what I would like to know is, what has kept you on that path all these years?

When my first novel came out (Tamar, 2002), I knew I’d probably get around to writing one about Vietnam. It was just a matter of waiting until the right combination of characters and timeline came up, and it finally did in this fourth book in The Restless Years series. I just didn’t know it was going to take me nearly twenty years to get to it.

MBC: You’ve written several books about the Vietnam war, both fiction and non-fiction. Do you think you still have more to say about the war, or is this the last book?

I don’t know. There probably won’t be any more fiction from me about Vietnam, but I keep saying someone should write the histories of the New Zealand show bands who toured South Vietnam entertaining the troops, and the New Zealand military nurses and Red Cross workers, and the New Zealand war correspondents, before they fade away for good. And if that it isn’t me it should be someone else.

At the start, Rowie and Jo were both very sure about what they thought of the war, but as the book went on, they became less so. I really enjoyed reading how and why their opinions changed as the story progressed. Which character, if any, most represents your own feelings about the war?

In 1969 I was ten, so I didn’t have any intelligent feelings about the war. Now, I think it was blatant American imperialism and an awful waste of an estimated 1.4 million lives. I think I can say several characters in the book come to that conclusion.

I loved the sense of humour of the characters -- Jo complaining about names made of letters, and Rowie’s quip back at her that “all names are made of letters, you nitwit!” -- The burping contest between Gina and David -- Matron, with her unexpectedly witty remark about Biggles. Can you tell me more about where you draw your inspiration from for your characters?

I use bits of myself – or I should say bits of my personality and behaviour, because that’s what makes us who we are – to build characters, and bits of the personality and behaviour of people I know or have known. And I listen to people, and I sit and watch people I’ll probably never know. And from all those options I pick and choose to create the character/s I want to present in my story. I’m pretty sure most writers do this, though now I think of it I’m not sure I’ve ever asked anyone else what they do. So that’s why my characters will sometimes have my sarcastic sense of humour, or flaws, or whatever. I’ll just point out that the burping contest is a remnant from my childhood and high school days.

I believe this book originally had the title “Sisters of Mercy”? Why the change?

It was thought ‘Sisters of Mercy’ might put readers off because of the abuse scandal associated with the religious organisation of the same name. Being a completely non-religious person myself, the only Sisters of Mercy I was really familiar with when I suggested the title was the band from the ’80s.

I enjoyed the little bits of low-key history that you threw in—things like aeroplanes and airports, clothes and cars, the Cartwright Inquiry—as well as the big-picture history of New Zealand’s involvement in the Vietnam war. How much research did you do for this book?

Well, I’d already done loads of research about the war in the 1990s for my Ph.D. thesis, and I could remember some of the  ’60s myself, such as the clothing and hairstyles (though that’s a trap, relying on your own childhood memories!), but I did need to do extra bits and pieces. Things like Auckland’s transport infrastructure, pubs near the waterfront, courses taught at Auckland University, the process for sending entertainers to Vietnam from New Zealand and Australia—that sort of thing. And the nitty-gritty of daily life at Nui Dat military camp in South Vietnam, which I got from an excellent book sent to me by a veteran of Victor 4 Company—all those little things that bring a story to life.

Your Restless Years series started with a fire in a department store, which is not Ballantynes, although obviously that’s the inspiration. When you’re writing historical fiction, how do you find the balance between sticking to the facts, and making things up?

Generally I’ll set up a framework based on accurate historical fact—a storyline if the major story arc hangs on a series of historical events, or perhaps just a historical environment if I’m only focusing on an era—and my characters will live fictional lives within that framework. Sort of like a historical skeleton filled out with fictional flesh. That gives me lots of scope for character development and action as long as the characters don’t break the rules of their time periods, and usually mine don’t.

Is it different writing about times that your readers may well be familiar with, as opposed to times outside living memory? Do you have a preference?

I think I prefer writing about time periods beyond living memory. The research is more challenging, which makes it more interesting for me. If I couldn’t do a decent amount of historical research for each book, I really don’t know if I’d bother writing them. My cut off date for ‘recentness’ is 1969, and I’ve just written in that period. Anything from 1970 just feels too modern to me, not historical at all, though really it is, to young people in particular.

You said that you wrote the book quickly--how quick is quick? How long do you usually spend writing a book?

My father was ill from mid-2018 till January 2020, when he died. After that I lay on the couch and watched Time Team on TV for six months, then I wrote this book during August to October of 2020, did a quick read-through, then sent it to my publisher in November knowing it was late and not my best work. But that was OK because with covid mucking up the book industry and publishing schedules there was time to fix it. Usually it takes me six to eight months to do the actual writing part of a book. Before that it’ll take me two or three months to put the outlines of a series together, including some of the more extensive bits of research. After the first draft of the manuscript is delivered to the publisher it can take between six and twelve months to go through the editing process, which includes four rounds of editing. So it’s not usually a quick exercise, producing a book.

What is a typical writing day like for you?

I don’t write every day, especially when I’m between books. But when I am writing I treat it like a normal job. I tidy the house so it doesn’t annoy me (kitchen, beds, put the washing on, etc), start work in my office at about 8.30am or 9am, check my emails (hoping there aren’t any), and work till lunch. My other half usually comes home for his lunch and so makes me mine. Yes, I know I’m lucky. If he doesn’t come home I don’t bother (or maybe tea and biscuits). Then I work till about 6pm. Usually I’ll work one day on the weekend as well. If I’m close to deadline I’ll work Saturday and Sunday if I need to. Some writers I know get up really early and write at 5am but I couldn’t do that. Also I don’t have to. I don’t have a family anymore I have to organise. There are definite pluses to getting older.

Are you working on something at the moment? What are you able to tell me about it?

I’m getting ready to write a new trilogy about a very clever London-born girl named Tatiana who emigrates to Sydney, Australia, in the late 1860s after the death of her beloved parents, an accountant addicted to the gaming tables and a retired prostitute. Penniless, Tatty starts a new life as an assistant to an undertaker, Titus Crowe, then marries him. When he mysteriously dies it seems he’s very unexpectedly left the business to her and Tatty Crowe becomes the youngest, and only female, undertaker in Sydney…

Your books about the Vietnam war include Vietnam, a novel for older children and teens. Would you like to write for children or teens again?

I would, actually. It took me a bit of effort to ‘get my eye in’ for that book. One, because it’s in the style of a diary and written in first person point of view and I don’t write in first person, I write in third person omniscient most of the time, and two, I really had to pull my punches to keep my content child-centric and to Scholastic Australia standards. For example, no swearing, not even words like ‘Jeez’, no mention of even mild domestic violence or excessive alcohol consumption, no dog poo, etc. In fact, I had all those and they were edited out. Maybe the dog poo stayed, I can’t remember. But I really enjoyed being in a young teen’s head, and I super-enjoyed researching the life of a teen in Newcastle in 1969. So yes, I’d definitely write more YAs if I had the time. I suppose it’s just a matter of planning, isn’t it?

Finally, I usually interview children’s authors, and I often ask about their favourite childhood books. Although you generally write for adults, I would still like to know what books or authors did you enjoy most when you were a child, and why?

Well, The Chronicles of Narnia of course, like millions of other kids. I’ve just ordered my third boxed set. The Time quintet by Madeleine L’Engle; Over the Hills To Fabylon by Nicholas Stuart Gray; The Tripods trilogy, John Christopher; The Borrowers series by Mary Norton; Elidor by Alan Garner; anything by Ursula Le Guin or Peter Dickinson. I had a big box full of these sorts of titles but we’ve moved around so much I’ve lost it, damn it. They were probably all mouldy or disintegrating by now anyway. I loved them because they are pure escapism, and sometimes a kid needs to get away.

The Leonard Girls by Deborah Challinor (HarperCollins Publishers) is out now.