Did you ever wish to meet your favourite author when you were little? Did you get a chance? What did you say or ask? When I was a keen young reader, all my favourite authors were already dead. Except one.

I was lucky enough to meet her once. She was talking to the teachers in the foyer after the school visit, drinking coffee and smoking her cigarette. I was hiding behind the corner, gathering my courage and waiting for the best moment to come. All I could find at that moment was a small piece of paper. I decided it will do. Finally, I approached the table and asked her for an autograph. Her cold eyes pierced through the smoke between us and straight through me. A torrent of telling-off followed from her mouth. It must have been wrong question or wrong timing. According to her, it was the size of the paper. Only later on I learned she was writing children's books but did not like children. It took me ten years to re-establish this fractured reader-writer relationship.

I am pretty sure none of the young visitors to Auckland Writers Festival had an experience like that! Children and their parents had a chance to listen and see some of the best authors in the world. Besides some big-name-sessions on Saturday and a family-focused day on Sunday, the school programme featured some great names during the week, including great American YA author Laurie Halse Anderson, a former comedian Natalie Haynes, performing poet Grace Taylor, New Zealand YA author Bernard Beckett, sci-fi YA debut writer Rachael Craw, singer and songwriter Hollie Fullbrook and cartoonist and creator of graphic novels, Ant Sang.

I could not believe my eyes when I stepped into the ASB Theatre on Saturday morning, before the David Walliams session. The place was like an anthill - little excited readers wriggling everywhere! When it was time for questions, their hands shut up in the air and I was afraid a couple of them might jump off the balcony, on which we were seated. After the show the excitement followed in the queue. I have never ever seen so many patient children in my life - some of them were queuing for more than two hours to get their books signed by David. No arguments, no rows, just very excited faces.

An afternoon session with Morris Gleitzman, Australia's most celebrated writer for children and young adults, followed. On Sunday, after Captain Underpants/Dav Pilkey revealed a few of his drawing tricks, I walked into the foyer of Herald Theatre, where the family Sunday sessions were taking place, and caught an illustrator Raymond McGrath surrounded by a group of children. They were deeply focused on their work, illustrating and drawing monsters. Donovan Bixley, an illustrator and graphic novels author, was signing his books on the other side of the room. I mingled in the crowd to find a few keen young readers, who shared their impressions of the festival and their ideas about books. 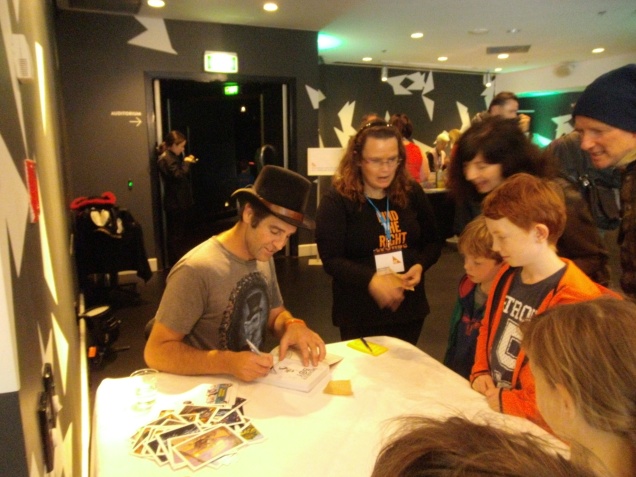 Donovan Bixley, top, and Raymond McGrath, bottom, working their magic with the little ones at Auckland Writers Festival.

First, I talked to a very young lady, Ava, who at the age of six already knows a true value of poetry as she came to listen to Jenny Palmer present her A Little ABC book. Jenny's session was not the only one Ava attended. Donovan Bixley was pretty entertaining, talking about Young Jimmy, the hero of his comic hit Monkey Boy, and Zak Waipara presented his work on Maori myths. Ava was not shy about sharing what she is reading to her mummy at the moment: The brave kitten (Holly Webb) and How to train your dragon (Cressida Cowell). She usually gets books from her favourite Waiheke Library, which I visited next day and decided with no doubt it's my favourite as well.

Sitting in the corner and reading a graphic novel was Kea. He is a quiet one, but there is something smart about his face. He tells me his favourite books are - I should have guessed - graphic novels, because "they're cool" - I should have guessed that as well! He has seen quite a few authors during the festival, but his favourite is - you have probably guessed - Donovan Bixley. I wonder what he would be writing about, if he would be a famous author. With no hesitation, he answers: "Action stories, with lots of heroes!"

I catch Cooper and Ruby just before they whiz back in the theatre to see Trish Gribben and Judy Millar present their pop-up book Swell. After seeing David Walliams, Dav Pilkey, Morris Gleitzman, Jenny Palmer, Zak Waipara and Donovan Bixley, they both agree that David Walliams was the funniest and Dav Pilkey was exciting because he draw pictures and talked about his early childhood. Cooper found Zak's session very interesting because it was all about Māori myths. If he was a famous author, Cooper's stories would be full of action, ghosts and pirates. Ruby would write funny stories, like Roald Dahl or David Walliams.

Our time is up and I let children return to the next session. While I'm leaving the foyer, I ponder who of them would be my favourite writer. I decide it would probably be Ruby. And I am absolutely sure, she would not tell me off, if I asked her for an autograph.