"I would far rather be liked for the way I write than for the fact that I happen to write detective stories." Despite her wish, Dame Ngaio Marsh is mostly know for her detective stories. With two million copies of novels sold internationally, Ōtautahi’s own Queen of Crime is probably New Zealand's most famous writer. Becoming a celebrity early in life did not prevent her from being a fiercely independent and private woman. Even today, she remains an enigma.

Ngaio's life was full of dualities and split between hemispheres. When she was not directing another Shakespearean play, she was writing a detective novel. When she was not walking down the streets of London in her most extravagant fashion, she was rehearsing a play with students in a cold old brewery in Christchurch, smoking cigarettes and eating chicken sandwiches for lunch. She was a woman artist in times when women's' social and private roles were defined differently. Living independently and providing for herself all her life, Ngaio did not fit the norm and was pretty unconventional for the times.

This year marks 40 years since Dame Ngaio Marsh passed away. Her home, Marton Cottage on Port Hills, has been turned into a museum and is lovingly cared for by the Ngaio Marsh House and Heritage Trust volunteers.

Christchurch City Libraries have therefore prepared an exhibition, which will uncover Dame Ngaio Marsh’s work and life. Amongst the material gathered from Ngaio Marsh House and Heritage Trust, St Margaret’s College, Alexander Turnbull Library, Ngā Taonga Sound and Vision and Christchurch City Libraries, a keen detective eye will be able to find rare manuscripts and writing notes (she burnt most of them!), play production books, her own artwork as well as the artwork of The Group and even a beret – her signature style accessory.

The exhibition will be on show between Saturday 27 August to Sunday 27 November in Te Pito Huarewa Southbase gallery in Tūranga.

View the Flickr set of images of the exhibition 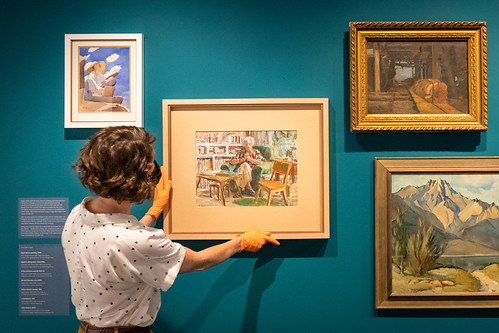 Murder in the Library

Join us for a two-hour fun-filled detective experience. Form a team of seven suspects and search the library for clues and solve a whodunnit based on a Ngaio Marsh Murder! We encourage the suspects to dress in 1940s fashion! Free. Bookings required.

Death on the air and other stories 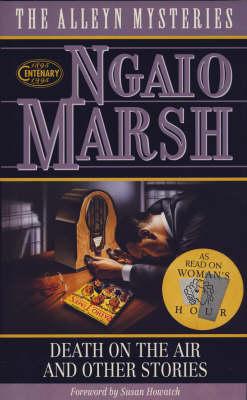 Relax and enjoy listening to a Ngaio Marsh short story read by a guest reader from Death on the air and other stories. Free, no booking required.

Three global crime-writing heavyweights crack open their notebooks for a conversation about the inner workings of the criminal mind, the challenge of understanding people who do terrible things – and why readers find such dark material so hard to put down. Val McDermid, the Queen of Crime, Michael Robotham, Australia’s hottest crime writer, and J.P. Pomare, Aotearoa’s finest crime writing export, examine the flawed characters of their famous protagonists – and whether writing about menace and violence impacts their own lives. In conversation with Vanda Symon. Following the discussion, Val and Michael will present the 2022 Ngaio Marsh Awards for Best Novel, opens a new window and Best First Novel, opens a new window. Find out which of Aotearoa’s talented writers of mystery, thriller and crime will take home these coveted prizes.

More about exhibitions at Tūranga