Patricia Grace is appearing at WORD Christchurch. Her autobiography, From The Centre; A Writer's Life:

"I decided to sit myself in the middle of the story and move it back and forth around me. I found this to be a way that works for me – placing myself at the centre, keeping characters and ideas close, and from the centre reaching to the outer circles, in any direction, for what I need in order to bring everything together."

Patricia Grace (Ngati Toa, Ngati Raukawa and Te Ati Awa) is one of my favourite authors.

For me, her books tick all the boxes. I love their connection to place: Aotearoa; its landscapes, oceans, kai moana and the battle to keep iwi land from being developed.

Grace's characters are strong, feisty, full of mana and Māori. Her plots relate the beauty and aroha in the business of living in harmony with whānau and land that provides food, and chronicle a very real fight to preserve not only ancestral homeland, but also to preserve Te Reo, which peppers her English sentences with meaning.

Patricia Grace's biography, From The Centre, describes Grace's writing process: taking the reader on a journey from her family's origins in Hongoeka and Te Whanganui-A-Tara, Wellington, to her adult life as a teacher and writer; touching on the seeds that grew into her many well-loved and confronting stories, representing Māori in New Zealand literature.

Many of Grace's stories give life to characters caught between two worlds: the modern world of the city, and the old ways of the Pā. The lives of all whānau in these stories are enriched when a character returns home, bringing skills with them learned in the city. In From The Centre, she describes how excerpts from her books are reflections of herself and her iwi's experiences.

Her well-loved books tell of people showing resilience and innovation, reminding those of us that live in a disposable society that our forebears could make something from nothing - surviving on their own veggie gardens and kai moana during the depression, building driftwood fences, using nature's provision.

Grace's mother, who was Pākehā, was 'a good writer and speller...imaginative and inventive'. Patricia began writing at an early age. Her father was Māori (Ngati Toa, Ngati Raukawa, Te Ati Aea), and exceptionally good at maths. I was amazed to read he had built their first home by hand, hacking it out of the unforgiving cliffside of Melrose.

Her parents had met while working at John Dickinson's Stationers and Grace says that meant there were always writing materials around.

She recalls how the short story, Harp Music, from The Sky People, is a memory from Grace's girlhood. She played 'radios' on the fence in Melrose as a child. The memory of this was sparked off by a psychic:

'As I wrote there was a sharp image I had in my mind of the joyful girl running towards me in a navy-blue coat'. Had I been true to her, I wondered?'

Another of Grace's short stories, When the lights go on again all over the World, references the blackouts of World War II. Grace describes her father walking to work in Ngaio Gorge, (a really long way from Melrose!); flashing his wee light at them from the bottom of Melrose hill. They did the same for him when he sailed around the Heads in the troop ship Aquitania, on his way to war.

In From the Centre, Grace tells of spirits invading her father's dreams when bones had been disturbed while building on family land at Hongoeka, near Wellington: "bones flew in through the windows and knocked on the walls at night."  These had to be caringly re-interred, to put the spirits to rest.

Grace's father, she says, was the inspiration for Tu: the subject matter taken from notebooks written during his time in the 28th Māori Battalion in 1940. Like the protagonist, Pita, he didn't immediately enlist, thinking, as others had, that the war wouldn't last - '"but his conscience wouldn't allow him to stay home while others, as he saw it, were away fighting on his behalf."

Ned and Katina was written after the couple's children approached Grace, having read Tu, and asked her to tell their story. Ned was Māori, Katina Italian. Katina had sheltered and nursed Ned during the war in Crete - the rest was history, as they say. 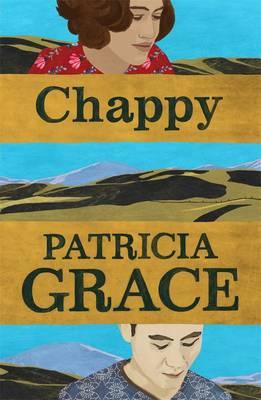 Chappy marked a return to fiction but the story was based on a Japanese shopkeeper who had been imprisoned on Matiu Somes Island as an alien during WWII. Many Japanese were wrongly imprisoned as threats by the Allies all over the world. He had been deported, forced to leave his family in New Zealand. Grace says,

'I did not attempt to enter the psyche of a Japanese man but sought to understand his heart as a human being.'

Descriptions of basket-making in Chappy, says Grace, came from memories of her grandfather, who made baskets from willow - a method that has been revived today. Sadly, because he was a Pākehā man who married a Māori woman, he was seen to have 'married down' - "an insult both to himself and to our grandmother, whose whakapapa, I came to learn, was impeccable."

In Cousins Grace told the heartbreaking story of a stolen generation: Māori and part-Māori children, separated or taken from whānau and cut off from them, to be raised white. Sadly, we are hearing testimonies like this still.

The constant fight to stop development of tribal land, always in the background of Grace's life, is also present in Cousins: Patricia fought to stop development of a piece of land in Waikanae passed down to her by her grandfather, Wi(remu) Parata Te Kākākura (Ngāti Toa and Te Ati Awa), who was born on Kāpiti Island. She managed to have it secured as wāhi tapu - of religious significance - to prevent it being annexed under the Public Works Act (which is a breach of Te Tiriti).

The setting for Dogside Story was a holiday place for Grace's whānau: the Uawa River in Tolaga Bay. Dick's sister Ngaio asserted that her side of the river was superior due to water springs. However, all Patricia could see were a lot of dogs on their side, compared to a lot of churches on the other - dogside, Godside!

"The sea hems and stitches the edges of the land where houses stand windowing the neatened curve of shore..." (Pōtiki)

Hongoeka Bay, with its rock pools, fishing, hunting eggs and the bush, says Grace, 'was always the safe place for me. It still is. It was a joy and a relief to be there...'

It was the setting for Pōtiki:

'I decided I would give Pōtiki the shape of a traditional whaikōrero...it would be and oration that began with a chant, opened out into the main body of the 'story'...and ended with a waiata.'

Patricia's husband, Kerehi (Dick) Waiariki Grace (Ngati Porou) is the unsung hero in her life. They met at Teachers' College and once wed, he was her partner in teaching at Māori Schools in Northland and later Wellington. Dick was a stalwart of Te Reo in schools and became an advocate of Māori representation in the Ministry of Education.

Dick was instrumental in helping Iwi in Hongoeka to re-learn traditional skills to build a Wharenui there. There is a beautiful passage about the nature of carving in her anecdote about this.

"When the carver dies he leaves behind him a house for the people. He leaves, also, a part of himself..."

As I read of this great man's passing, I was moved to tears. Patricia renders a beautiful poem to his memory:

Remember me where the sun goes down into the sea

Behind Whitireia, Mana and Kapiti...

Patricia Grace is a breaker of barriers. Personally, she refuted the racist labelling that Māori students 'didn't do well' in academic subjects; an assumption that hugely underestimated her capabilities, while not providing material that she could relate to.

With this in mind Grace set about breaking another barrier: non-representation of Māori, and her language, in childrens' and adult stories.

"I never found myself in a book. The children I read about lived in other countries, lands of snow and robins...They did not belong to extended families, did not speak as I spoke... It was wrong to be poor... No one was brown or black unless there was something wrong with them... If there are no books which tell us about ourselves, but tell us only about others, that makes you invisible in the world of literature."

Enter The Kuia and the Spider, a beautifully illustrated picture book that was published in English, and Te Reo, and is now available as a bilingual story.

The Kuia and the Spider

'When asked to provide a glossary, I decided that I did not want the Māori language to be treated as a foreign language in its own country.'

Inspired by reading New Zealand writers at Teachers' College (Sargeson, Mansfield, J C Sturm, and Kiwi Dalmatian author Amelia Batistich) , Grace began to write 'from the self' - realising that 'daily life, everyday speech, contemporary New Zealand family relationships could be made into stories that people would read and relate to...I also knew that there were people I could write about...who hadn't been written about before.'

Patricia Grace turned eighty-four when we went into lockdown. Many happy returns, Patricia.

I'll leave the last word to Grace, whose words are much more eloquent than mine:

'When people ask me what most inspires me in my writing, the answer will always be 'people', everyday people. What people around me do and how they do it, what they say and how they say it... how we relate to each other, the outside world, the many environments (particularly of land and sea), the ancestors, the past, the now, the future.'