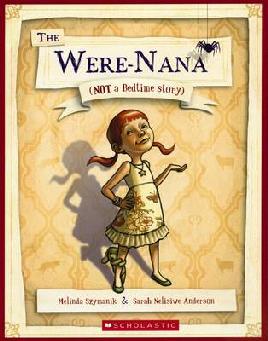 The youngest readers weren't forgotten in the WORD Christchurch festivities. On Saturday afternoon Read It Again! let five picture-book authors share their creations with an eager audience of three to eight year olds. Sheila Sinclair of Christchurch-institution The Children's Bookshop chaired the session.

Melinda Szymanik read the NZ Post Children's Choice award winner for 2009, The were-nana. Little sisters in the audience were positively gleeful at the morality tale!

Gavin Bishop brought a special guest: Teddy one-eye, author of an upcoming autobiography. Teddy one-eye was a dishevelled but very accomplished bear who taught himself to read over schoolboy Gavin's shoulder. Gavin also shared the story behind Teddy's tragic eye loss: as a youngster he admitted to his Grandma "I've swallowed one of teddy's eyes." "You'll probably die." was the reasurring reply. Happily, he's survived long enough to read Stay awake, Bear!  to an attentive audience.

Charisma Rangipunga shared a song she sings to her children about a witch who lives in their wardrobe and tries to tempt them out of bed with lollies. Unfortunately for naughty children, the lollies turn out to be worms and the children are then forced to work in her dirty sock factory.

Kristin Hersh read a story inspired by her son's dislike of touring: Toby Snax. By the end of the story, lots of the kids in the audience would've been eager to head off for international adventures of their own.

Damon Young concluded the session with a continuum of ninja-knowledge and a rowdy reading of My Nanna is a Ninja, which he described as a "celebration of the fun of grandparents, the verve, the energy!"

Gavin Bishop showing off his inspiration for new book "Teddy One-Eye" at the Truth About Kid Lit at #wordchch ^AR pic.twitter.com/0im2H2tG2E