Spec Fic... what‘s that? Spec Fic is short for Speculative Fiction and was first used by R.A Heinlein in 1953 in a Library Journal as an umbrella genre for fiction about “things that have not happened”: science fiction, fantasy, horror, and all the bits in between. Spec fic is alive and well and happening in Christchurch as last weekend's Spec Fic meeting to celebrate local Sir Julius Vogel awardees testifies.

About fifty people gathered in the Fendalton Library boardroom to congratulate four Vogel award finalists, two of whom won in their category. Beaulah Pragg, herself a published author, introduced the session and multi-award winning Helen Lowe who spoke about the importance of the genres and the place of awards. Fantasy, she told us, is probably the oldest literary device for talking about reality, as the myths and folk tales of hundreds of human cultures attest. While writers write for the delight of storytelling and because the stories demand to be told awards can still be tremendously affirming to those who frequently work in some isolation. Moreover, events like this demonstrate the importance of the literary community supporting and celebrating one another.
Read Helen's keynote on her blog.

The first finalist speaker was Shelley Chappell, who was short-listed for both best novella and for best new talent. Shelley has a PhD in Children's and Young Adults' Literature from Macquarie University in Sydney but writes for all age groups. Many of her YA titles are re-tellings of fairy stories, Cinderella, Sleeping Beauty, Rumpelstilkskin. Re-telling fairy tales, often with a twist, writing new ones, and exploring their development has become a fairly popular genre with several notable proponents such as J. R. R. Tolkien, Catherynne M. Valente and Jack Zipes.

A.J. Fitzwater was the winner of the Best New Talent award, although she said that she's been at it for five years so being called “new” was an odd thing to wrap her head around. She read us an excerpt from her latest story about to be published in Andromeda Spaceways Inflight Magazine, Issue 61 - "Long's Confandabulous Clockwork Circus and Carnival, and Cats of Many Persuasions" which seems to have a 'carni-punk' setting so look out for that one. A. J. also spoke about her experiences at the prestigious Clarion Writers workshop last year where she underwent an intensive six weeks of tutoring and writing with top writers such as Ann and Jeff Vandermeer, Nora Jemisin, and Catherynne Valente. 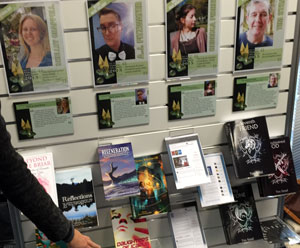 Our final winner was Rebecca Fisher who won the prize for Best Fan Writing. Fan writing isn't the same as fan fiction, but rather is awarded for blogging, interviewing, reviewing and other forms of writing about speculative fiction. She has a popular blog They're All Fictional, guest blogs at various sites and is a top reviewer on Amazon so if you're into the genres she's one to follow.

Connecting with New Zealand genre authors and their work isn't always easy, so events like this are really important. If you want to find out more about these great authors follow the links above and keep an eye on the Sir Julius Vogel Awards and the SFFANZ (for science fiction and fantasy) or other NZ book sites.