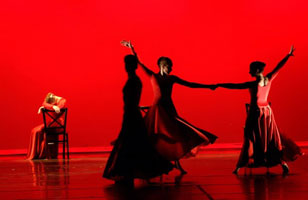 Anyone who has anything to do with professional dancing knows that it requires extraordinary levels of physical fitness, control and dedication to make it as graceful and seemingly effortless as they do.

I've loved the ballet ever since my Mum took me to a Southern Ballet production of Stravinsky's The Firebird as a six year old and pestered her into lessons. It still grabs me in a way that no other live performance does, surely a combination of the setting, music and movement, so I'm thrilled to be going along to the Royal New Zealand Ballet's production of Midsummer Night's Dream later this week.

I know the story well enough of course, it being based on one of Shakespeare's most popular plays, but I am not at all familiar with the music by Felix Mendelssohn. According to liner notes for one recording found in the libraries' Classical Music Library eResource (see below) the music was composed to be incidental music for a performance of the play in 1843.

Find out more about this production via their twitter feed.

Where Snowflakes Dance and Swear

* blog title is a bad '90s TV show reference for which I apologise.