So, what usually happens with me over the summer is I drag a big pile of books and DVDs home and then I do an average to poor job of getting through them all over the Christmas and new year break, because even though I might not necessarily be at work, there's still plenty to do at home (taking the Christmas tree down, letting the 3 year old help, cleaning up after that disaster and so on...)

This year I had the misfortune of getting a cold in the new year that turned into a chest infection and necessitated quite a bit of lying in bed feeling sorry for myself. Which as everyone knows is the perfect time to get some reading done. Here's what I managed to rattle through as a result *cough*.

American Gods - As recommended by Pickle Bronwyn, this is a great read. It spans a great many topics - Norse mythology, theology, Americana, First Nations beliefs - and it's also kind of a road-trip novel. Engrossing and enjoyable.

Like a Queen - To say Aussie writer and mum Constance Hall is a phenomenon is not overstating the case. Her posts on parenting and relationships and the importance of building other women up rather than tearing them down are massively popular, largely due to Facebook. In only a couple of years she has recruited a legion of fans (or "Queenies") from all walks of life who love her brash, no-BS yet tender approach to modern womanhood. Her book is more "hippyish" than I usually go for but it's brutally honest and raw too which is very affecting. A great, affirming read for harangued and under-appreciated mothers.

You can't touch my hair: And other things I still have to explain - Phoebe Robinson made a fan out of me within about three pages. She's wickedly funny, scathing and more than a little bit goofy while tackling pretty important issues like racism and sexism. I learned a lot about African American hair from this as well as what sexism looks like to a female actor/comedian. I LOVED this book (even though I cannot fathom why she put The Edge at the top of her "which order I would have sex with the members of U2 in" list. The Edge. REALLY?). It's a humorous mixture of pop culture, social awareness and general badassery. Highly recommended.

Talking as fast as I can - Actor Lauren Graham's memoir is a lot like what you imagine her personality to be - considered and cheerful with plenty of quips, non sequiturs and tangential observations.

It's a must-read for Gilmore Girls fans and recommended companion reading if you've recently watched the rebooted "A year in the life" series. Don't read this expecting to get the low down on any Hollywood scandal though. No careers are ruined. No beans are spilled. But it is a light, amusing read that makes me keen to check out her first novel (a second is in the works) as well as her screen adaptation of The Royal We. There's also a handy "writing process" guide borrowed from another writer included that I may well put into use. Also, how much is that cover photo crying out for some book-facing? So. Much. 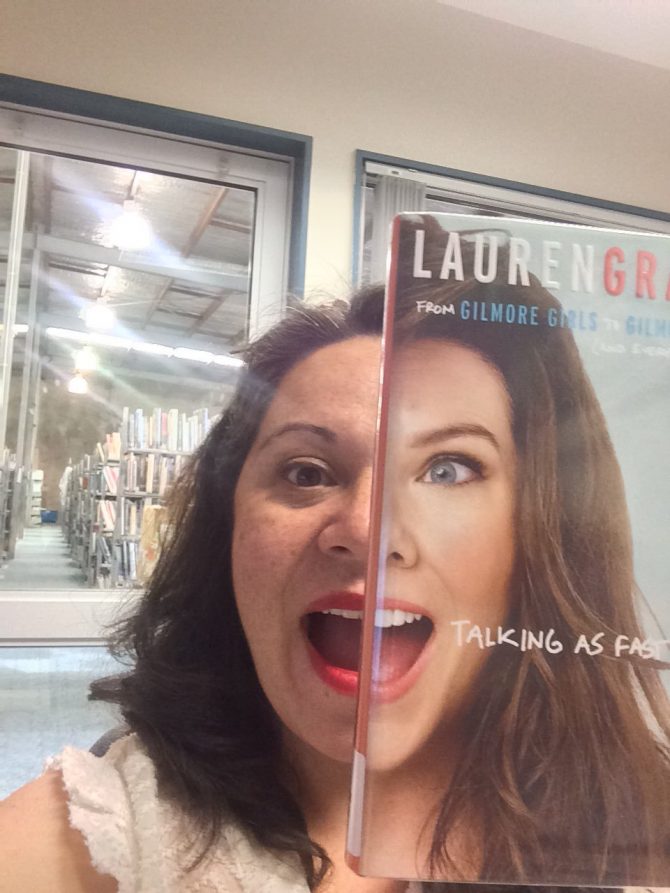 The world according to Star Wars - I am a sucker for any book that indulges my desire to ponder the many facets, nooks and crannies, and minutiae of the Star Wars universe. And Cass Sunstein, one of America's most highly regarded legal scholars, obviously feels the same since he wrote this book, seemly to fill that exact niche. It's a mixed bag (the section on the U. S. constitution was a bit tenuous, in my opinion) but there are plenty of opportunities to ponder the meanings, symbolism and politics of this most popular of sci-fi series' and to view it through a variety lenses. Recommended for fans.