Pourongo is a term that my Nanny (Mum's Mum) gives to those who are from arranged marriages between two warring factions to bring peace. She called these relationships ‘pillars of peace’ that would ensure peaceful relationships of future generations. Some also know these marriages as takawaenga or formal political alliances that were held in highest esteem by both iwi. Probably the most well-known Kāi Tahu Pourongo or Pouroko (as it’s also known here in Te Waipounamu) are the Taiaroa, Ellison and Huria whānau – though there are many more. My own whānau are a product of such arrangements two generation removed. My Mother is of senior Ngāti Toa lineage which is woven together with similar lineage from Te Āti Awa, Ngāti Mutunga, Ngāti Raukawa and Ngāti Maniapoto. My Father is Kāi Tahu whānui through and through, born and bred in Te Waipounamu with strong Irakehu, Kurī and Tūhaitara links. So naturally whakapapa and history conversations were always interesting when Nan came to stay.

For Ross Calman, being of a similar mixed lineage, no doubt equally interesting conversations occurred during the course of his life.  But no more so than after he translated into English a manuscript written in Māori by Tamihana te Rauparaha, son of Te Rauparaha (the Ngāti Toa chief) – He pukapuka tātaku i ngā mahi a te Rauparaha nui – A Record of the life of the great Te Rauparaha. Having contributed to and edited a number of Māori language, history and children’s books over the years, the publication of this book wasn’t his first foray into the world of literature. It was however the most personal, being a descendant of Te Rauparaha himself.

He Pukapuka Tātaku I Ngā Mahi A Te Rauparaha Nui

Professor Te Maire Tau is what one might term a philosophical historian. Being raised on his whānau land within the Māori Reserve of Tuahiwi in North Canterbury, he is well versed in his tribal (Kāi Tahu) history and whakapapa. Tau’s lineage, on both his Mother and Father's side, can be traced from some of the senior Kāi Tahu families of old, placing some of his ancestors at both Kaiapoi and Ōnawe Pā when they fell to Te Rauparaha and his men in the early 1830s. Known to many of us who studied under him, as a ‘tough marker’, it was therefore somewhat intriguing to know where this publication would land for Tau.

As the nor-wester howled outside, we gathered in The Chamber at The Piano. Such was the interest in this presentation that there were many turned away.  I thought of the wind blowing outside and its link to the fall of Kaiapoi and pondered was this an ill omen of things to come?

But no, such thoughts quickly dissipated during the mihi whakatau from Tau, Upoko Rūnanga (head of the tribal Manawhenua Council) of Te Ngāi Tūāhuriri. Warmly welcoming Calman and those gathered, Tau extended warm greetings to Ngāti Toa and their descendants present and then more importantly warmly, and dear I say excitedly, endorsed Calman’s publication and work.

Now as a former student of Tau, I know such a ringing endorsement does not come lightly and as Tau spoke I quickly became aware of the reason for his excited sentiment.  In the words of Tau “this is a solid piece of history, this is good history which is not based on literature theory but is a recount of movement and action. Māori were obsessed with details [which is reflected in the pages of this book].’ Tau congratulated Calman not only on his work but the fact that it was in dual languages, allowing the reader to ponder the original text.

The afternoon discussion was facilitated by Dr Michael Stevens.  A young Kāi Tahu historian born and bred in Awarua | Bluff. Tracing his lineage from Te Ruahikihiki and Te Rakiāmoa, he is a member of the Metzger whānau who have kept alive the intergenerational use of pōhā to preserve Tītī. Stevens is the mokopuna of Graham ‘Tiny’ Metzger who is renowned for his pōhā skills ensuring that each generation of his whānau are entrusted with this knowledge and skill. Basically they are living history. That being said Stevens, supported by the Marsden Fund, is currently writing A World History of Bluff which he describes as a long-running archive-based project.

As the afternoon progressed the discussion turned to attempts of others to translate the manuscript producing substandard, misinterpret text, mostly shaped by the translator to suit their needs. Or, as Stevens noted, in the case of the only other full translated text, was based on poorly typed secondary sources, with the translator never sighting the original manuscript. Stevens, like Tau, also suitably impressed with Calman’s publication, commended him on his work.

So where did it all begin? Calman recalls as a student, some 30 years earlier, coming across the manuscript, a photocopy of the handwritten text, in the University of Canterbury Library.  Intrigued by the handwriting, he was drawn into what was to eventually become a 20 year project acuminating in the publication of He pukapuka tātaku i ngā mahi a te Rauparaha nui – A Record of the life of the great Te Rauparaha. Calman talked about the process undertaken starting with seeking support and the blessing from Ngāti Toa kaumātua. Much discussion was held regarding the kanga contained within the text and what, if any, impact it might have being included in the text. It was concluded that the roll of the Pouroko have interwoven the two Iwi together thus weakening whatever sting such things may have had. Calman notes that at times when the task became heavy, he was grateful for the support and guidance of Piripi Walker (Ngāti Raukawa).

The second part of the programme began with a reading from Calman of a section of the text in Māori. This was supported by taonga puoro played by Calman’s wife Ariana Tikao, a descendant of Tamati Tikao a former Kāi Tahu prisoner of Te Rauparaha taken to Kapiti and later released. Translation slides were provided for those who did not speak Māori but for those of us that did, with eyes closed, the sound of the taonga puoro almost made it feel Tamihana himself was speaking to us.

The last part of the discussion turned to the style in which the text is written.  For Tau and Stevens it was an interesting read of oral histories rather than oral traditions. It is a personal account of the life and times of Te Rauparaha as told by his son from his birth until his death and everything in between. Calman’s treatment of the material is a balanced approached, it is not overwhelmed with personal comment or contains long footnotes with extrapolated content. Rather it is a text that has been allowed to speak with its own voice.

The afternoon concluded with a strong recommendation from Tau and Stevens to all the historians in us to, if we haven’t already, take time to read this stunning publication. Inspired by the enthusiasm and support shown by Tau and Stevens for this book, I headed off to into the early evening to hunt down a copy – the wind by now had changed as I had expected.  Given my own link to the subject matter it is obviously a must read for me and I invite everyone to check it out too. As we begin to embrace our countries true history, publications like this are invaluable – so enjoy!

My thanks to Nic Low and WORD with the support of Te Rūnanga o Ngāi Tahu for providing this opportunity to attend this session. My thanks to Te Maire and Mike for providing a truly entertaining afternoon – love ya work, thanks also to Ariana for her beautiful contribution to this session. Lastly a sincere thank you to Ross for breathing life back into the old man’s words so that they are no longer lost in time. 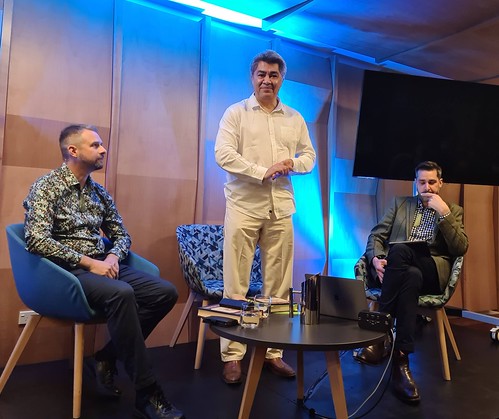