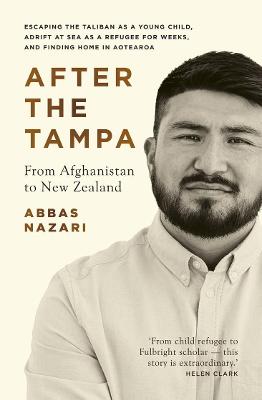 Afghanistan fell to the Taliban earlier this year after the withdrawal of United States troops. The previous Taliban regime that ruled Afghanistan in the 1990s imposed extreme religious law and extreme punishments included stoning people deemed to have broken those laws.

New Zealander Abbas Nazari can give a unique perspective on the current situation. As a young boy, his family fled Afghanistan and ended up on the Tampa, a Norwegian cargo ship that rescued Abbas and 400 other refugees in 2001. The Tampa was turned away from Australia leaving Abbas and his family in limbo before New Zealand offered to resettle them amongst 150 of the Tampa refugees.

Abbas Nazari has written a memoir After the Tampa in which he writes powerfully about his family's ordeal in Afghanistan and aboard the Tampa before arriving in New Zealand. Former Prime Minister Helen Clark will join by video link to discuss the political circumstances of Afghanistan and refugees on Friday 12 November at the Christchurch Town Hall. Helen Clark was Prime Minister at the time New Zealand invited 150 refugees to resettle in Aotearoa.

Abbas Nazari shone at school. After only six years of speaking English, he came third in the New Zealand Spelling Bee 2008. He graduated from the University of Canterbury in 2016 after studying Politics and Diplomacy and has worked as a New Zealand Treasury analyst. A Fulbright Scholar, he recently graduated from  Georgetown University in Washington DC with a Masters of Security Studies.

Abbas Nazari has previously written about the Christchurch mosque attack, New Zealand and American politics and the refugee experience in The Spinoff.

Reflecting on the 2019 Christchurch mosque shootings, Nazari argues for a politics of reconciliation and remembers fondly the support New Zealanders gave to his family while resettling in Aotearoa. In After the Tampa he challenges right-wing politicians who indulge in anti-immigration rhetoric to consider how they might be contributing to a politics of hate that ends in violence.

"As countless politicians to the far right of politics in Australia, the UK, Europe and the US condemned the Christchurch attack, I wondered if any of them felt complicit. While it is true that the Christchurch gunman was a 'lone wolf', his actions represented the extreme end of an ethno-nationalism that is sweeping across liberal democracies, largely on the back of economic anxiety and migration." [Page 202]

In his relatively young working life, Nazari has packed in academic study in New Zealand and the United States, work in the family's auto parts business, concreting, farm work, Uber driving, policy analysis at Treasury and public speaking as well as visits to Turkey and Iran. His conclusion is that New Zealand's "solid progress in race relations" puts this country ahead of many.

"On the quest to realise this land of milk and honey for all, we mustn't lose sight of the journey so far. It is certainly not mission accomplished, but society has come a very long way." [Page 202]

Christchurch City Libraries has books and other resources on refugees, the Taliban and Afghanistan.