The former Chief Post Office building is a significant landmark on one corner of Cathedral Square. It is still standing after the Christchurch earthquakes of 2010 and 2011, although its future is uncertain. This is a brief history of the building.

The proposal to build the Chief Post Office over 130 years ago started with a controversy about the site. Some wanted it to remain in Market Place (now Victoria Square) which was the site of the original Post Office. Other interests preferred the Cathedral site and an offer by the Canterbury Provincial Council to purchase it for 10,000 pounds was turned down by the diocesan authorities.

Designed in the Italinate style

The southwest corner of Cathedral Square was decided on and in 1875 plans were prepared by the Colonial Architect, William Henry Clayton, in an Italianate style and the contract was let to Daniel Reese for 14,521 pounds. 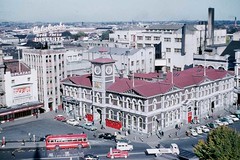 Described at the time as the new Government Buildings, they were to include Customs, Public works, Immigration and the Government Life Insurance departments, as well as the Post Office. The foundation stone was laid on 24 May 1877 and the Post Office opened on 14 July 1879, a year behind schedule.

An addition to the northern frontage was completed in 1907.

Public pressure for the building’s conservation has been long-standing. Plans to replace it were first mooted in the 1930s and the Post Office constructed a four storey building in Hereford Street. However, World War II put an end to plans for a new eight storey Post Office in Cathedral Square to replace the present building, and it was not until 1968 that the Government announced plans for the multi-storey postal centre (now the Christchurch City Council building) in Hereford Street.

In December 1981 it was announced that the old building would be preserved, and refurbished for continued Post Office and Telecom use. Many believed that the original building was severely compromised by the high-rise Telecom building built behind it on the Hereford Street side.

The building housed the Christchurch tourist information centre from 2000 to 2011. 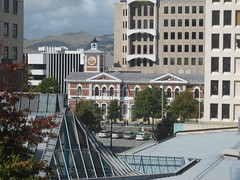 The Chief Post Office clock, reputed to be a reduced model of Big Ben in London, has an interesting history of its own. Installed in September 1879, it proved to be notoriously unreliable. Since 1888, the Christchurch City Council has undertaken the maintenance of the clock. In 1944, and again in 1955, the Council was advised that the mechanism had reached the end of its useful life, but there was a reluctance to spend money on a replacement because of the Government’s known intention to erect a new Post Office without a clock. An electric clock was installed which controlled the four visible faces as slave clocks and since that time the clock has been more accurate.

Originally the bell struck the hours, but in the 1930s it was silenced because of complaints from a neighbouring hotel, since demolished. However, in 1974, in time for the Commonwealth Games, the bell on the clock tower was reactivated but remained silent at night. Since the mid 1980s, the bell has not been heard after a fire damaged the mechanism.

In January 2018 it was announced, after several court cases, that the building would be repaired and repairs began later that year.