Victoria Square was originally known as Market Square or Market Place. It was the commercial hub of early Christchurch because it contained the Post Office and markets as well as the Police Station, Women’s Prison, animal pound, work stores and Immigration Barracks.

On 25 May 1903, The statue of Queen Victoria unveiled in Market Square, and the area was renamed Victoria Square.

Victoria Street, which until recent years cut through Victoria Square on a diagonal connecting it to Colombo Street, was an essential traffic route which provided a direct link to the Papanui Bush, a timber and firewood source for the early settlers.

Because of the heavy traffic flow the present bridge was built as early as 1864. A traffic count in 1862 showed that in one single day 1,000 pedestrians, 58 bullocks, 316 horses and one donkey had used the old wooden bridge. The 1864 bridge, erected to cope with this traffic flow, was built in iron and stone and is one of the earliest of its kind in New Zealand. In 1989 it was renamed the Hamish Hay Bridge.

In 1896-97 the area was cleared and developed as a park for Queen Victoria’s Diamond Jubilee. Victoria Square was redeveloped in the 1980s and became an inner city park area.

Victoria Square was framed to the north by the Crowne Plaza (formerly Parkroyal) Hotel and the Christchurch Town Hall. The Crowne Plaza was demolished after the earthquake of 22 February 2011.

The amphitheatre was opened in conjunction with the Parkroyal in 1988. The remodelling of Victoria Square was completed in 1989 and in the same year the design was recognised by the New Zealand Institute of Landscape Architects winning its highest award.

Victoria Square was closed to the public from late February 2017 for earthquake repairs after public consultation. The restoration was managed by Crown rebuild company Ōtākaro Limited in collaboration with Christchurch City Council and Matapopore on behalf of Ngāi Tūāhuriri/Ngāi Tahu. Their plan for the area:

The restoration design creates new links with nearby features like the Promenade, and includes new elements that better reflect shared Māori and European heritage and the Treaty relationship. The historic Bowker Fountain, which hasn't worked properly for many years, will be fully restored, and a new punt stop will be added adjacent to the Town Hall. 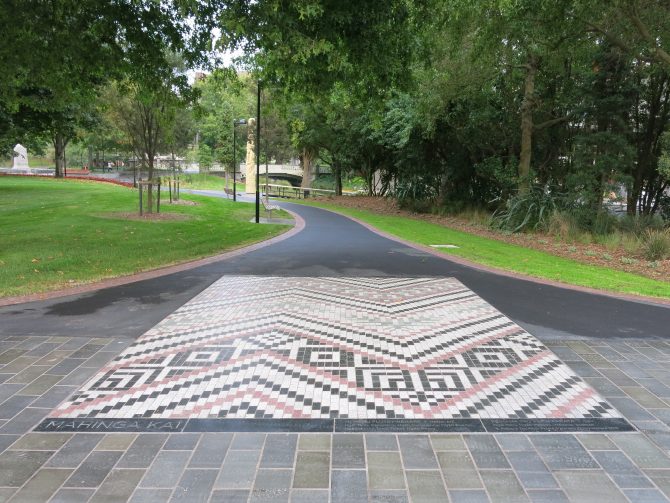 Statues and memorials in Victoria Square

Mana Motuhake is an artwork that pays tribute to the signatories of the Treaty of Waitangi.Created by Ngāi Tahu master carver Fayne Robinson in conjunction with Matapopore, Mana Motuhake features two upright waka. It has been installed near the statue of Queen Victoria.

The statue was made by William Trethewey, a Christchurch sculptor. It was gifted to the city by the late M F Barnett. The statue was unveiled on 10 August 1932 by the Governor General, Lord Bledisloe. On the granite base of the marble figure is the inscription:

The bronze statue of Queen Victoria features six bronze inserts on the base depicting early colonial times. It stands approximately 50 metres from its original site. The statue commemorates the Golden Jubilee of the founding of the Canterbury Settlement (1900) and is also a memorial to those soldiers of Canterbury (79 in number) who were killed in the South African War between 1900-1902.

The foundation stone was laid on 22 June 1901 by His Royal Highness, The Duke of Cornwall and York (afterwards King George V), and the statue was unveiled on 25 May 1903 by the Mayoress, Mrs H. F. Wigram. The statue was sculpted by British sculptor Francis J. Williamson.

The clock was gifted to the city in 1953 by the former retailing firm of Calder Mackay Limited. The clock mechanism is electrically operated and the face has an approximate diameter of 8.5 metres. Up to 7,000 plants are required each spring and autumn for the floral design.

The H. L. Bowker fountain, also part of the Victoria Square complex, was designed by Victor Hean in 1931 and was the first illuminated electric fountain in Australasia. In his will of 1915, Henry Bowker, a city businessman whose office overlooked Victoria Square, gifted money for a fountain or structure to be erected in front of the proposed Town Hall. It took until 1931 to erect the fountain and until 1972 to finally build a Town Hall. The fountain is on the site of a former animal pound.

The six metre high Māori carving in Victoria Square was unveiled in December 1994. The poupou was initiated by the Christchurch City Council in conjunction with the Ngāi Tahu Trust Board as a "1990 project" commemorating the signing of the Treaty of Waitangi.

The poupou is the work of Christchurch master carver Riki Manuel and was created from a totara trunk given by a West Coast farmer. The main theme of the poupou is mahinga kai (food resources). It also depicts tipuna (ancestors) of the Ngāi Tahu-Waitaha people.

The poupou was removed post-quake for conservation work and was returned to Victoria Square after Avon River landscaping works were carried out.

This page was originally derived from the Christchurch City Council handbook of 1998.